An important enlarging of the ambitions of the whole 'It Gets Better' campaign. (Which has been significant in itself, of course, and produced many beautiful statements, but... 'Jam Tomorrow', anyone?) Queer youth -- all queer people -- deserve better than simply having to hang on in there.
Thanks to Lucy for drawing my attention to this great video from PUT THIS ON THE MAP.

Posted by Chris Goode at 1:29 AM No comments:

I found a little clutch of amazing images the other day; this evening I need to share them with someone else, as part of the very early stages of a new project, and I figured rather than just mail them to him or upload them to a file-sharing site, it might be interesting to post them here.
In 1966 David Hockney was commissioned to produce a series of etchings to accompany a new edition of poems by C.P. Cavafy. The resultant prints are widely taken (including by me!) to be among the best and the most significant of Hockney's works; they immaculately capture the distinctive tonalities of Cavafy's poems, their languid precision and their radiant intimacies:

The images that have caught my attention recently however are not exactly those. I didn't know, but it's common in the production of limited edition prints for the original plates finally to be 'cancelled': i.e. to be defaced so that they're no longer usable, no further prints can be produced from them. Usually this means that 'CANCELLED' or some such is inscribed onto the image. Cancellation proofs are then produced to indicate -- to prove, I suppose -- that this has happened. It's a very odd instance of an artist vandalising their own work in order to preserve its commodity value: a fascinating logical apogee to the functioning of the art market.
So here are some of the cancellation proofs from Hockney's Cavafy series: and you'll see how compellingly these images are completely reframed. I've found other examples of cancellation proofs by other artists but nothing to match the production here of what feel simply like new, more radical, artworks. This is partly to do with the content, the 'subject matter'; partly to do with the playfulness of Hockney's amendments, which in some cases look more like scurrilous graffiti than official stamps of withdrawal. 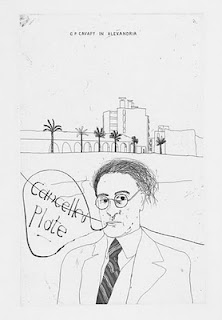 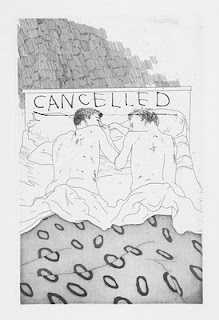 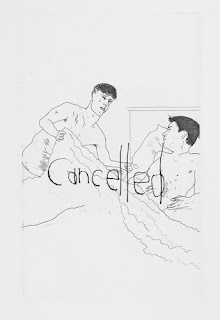 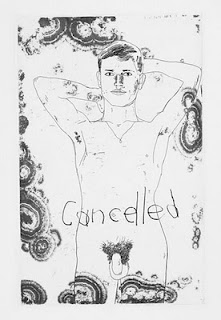 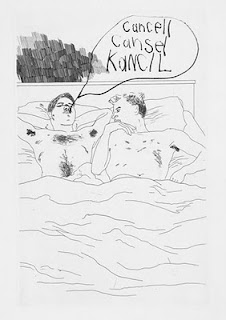 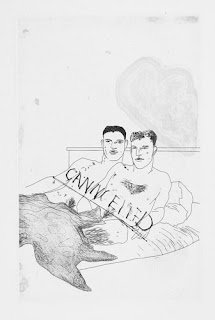 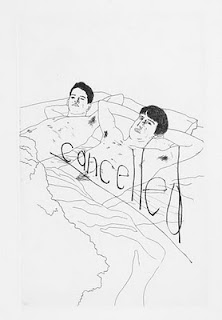 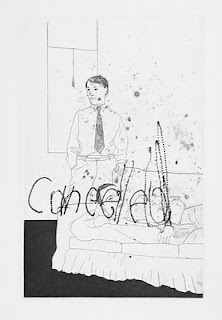