Friday 13th August: A lovely quiet morning in the house. I take a bit of time out from the work I'm doing to intervene in a blog discussion over at the Guardian, with Charlotte Higgins thinking respectfully through some misgivings about The Author. No beef with Higgins personally, though a temporarily low Gruntle Factor after a poor-ish earlier piece on interactivity and the role of the audience, which lumped The Author and Forest Fringe together with the concertedly atrocious BADAC (brand essence: "Without violence we have nothing.") and offered readers no argument or throughline by which to navigate or distinguish between what's going on in those three very different locations. (Incidentally, BADAC's blog of their experiences on the fringe so far this year is, at least for those who know anything about their work, tear-inducingly funny -- read it in chronological order for the full effect. Pardon my schadenfreude. By which I mean, please don't beat me up, fellas; or, if you must, at least go to the back of the queue.) I was in two minds about saying anything on the more recent Higgins piece -- attempting a nuanced comment on a Guardian theatre blog is sometimes a bit like essaying a pirouette in a crowded vomitorium -- but actually I seem to have gotten away with it this time. Soft huzzahs.
I'm mostly trying to give myself Fridays off from theatre-going, so as to make sure of preserving space for other kinds of expedition. Today, that meant Joan Mitchell at Inverleith House, which I mentioned looking forward to in a previous instalment.
In a way, it's hard to assess exhibitions at Inverleith House: it's such a beautiful gallery, in such an appealing setting (the Botanic Gardens), that you could probably mount a show of work by, hm, Mrs Jackson, say, or Neil Buchanan, or Sarah Lucas, and it would look pretty stunning. A benefit of the location is that by the time you reach the gallery you've probably spent ten minutes or more walking through the gardens, and after even just a couple of weeks of Festival furore, it's like attaching an oxygen mask directly to your brain. You arrive at the gallery really ready -- and able -- to see.
Never having knowingly looked at a Joan Mitchell painting or drawing in my life, except for the black-and-white promotional photo I posted in diary #3, what I wasn't remotely prepared for in this exhibition was the colour. My God! This show must be a synaesthetic's dream banquet! (...or symphony, I suppose...) Upstairs, Cypress, from 1980, a large-scale evocation of a cornfield -- or, rather, like all Mitchell's work, more an evocation of the sense memory of a cornfield -- bursts in your face like an explosive shower of citrus; an untitled late 60s canvas downstairs (and below this paragraph) is more florid, and a little sour rather than sharp -- vivid, but a grown-up taste. I would guess it's Mitchell's confidence and reach as a colourist, more than anything, that has led to her chronic undervaluing as a child of Abstract Expressionism; critically it seems she's more often situated in the classic European tradition: there are certainly strong notes of Van Gogh and I was reminded a little of some of (Raoul) Dufy's landscapes too. But her voluntary exile in France shouldn't dislodge her from a proper appreciation of her place in American painting, because she seems to me American artist first and last. In a way she feels like a more sensationalist cousin of Twombly, probably less technically gifted, certainly less interested in the line as a technology: but oh boy can she sock you in the eye. It's a marvellous exhibition, not big, but ample and spacious and there are half a dozen straight-up-and-down thrilling paintings and works on paper. 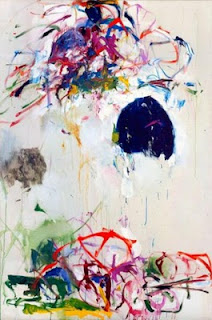 Presumably the people at Badac pronounce their company name with a soft C.