A Post-It note for your fridge door 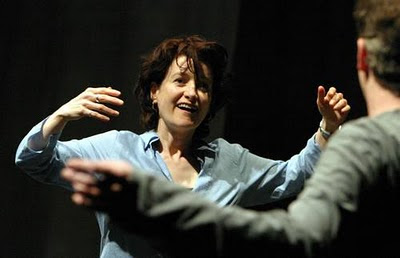 Do whatever it takes to get along to Improbable's Lifegame, at the Lyric Hammersmith till the 17th.
I saw it tonight and without an instant's hesitation I'd place it right up alongside The Street of Crocodiles, The Be(a)st of Taylor Mac, and Andrew Dawson's Absence and Presence as one of the most ineffably beautiful evenings I've ever spent in a theatre. Like all those pieces, its own heart-aching generosity is utterly (and consequentially) dependent on the generosity of its audience. Generosity is coming to feel like a limp word in writing about theatre but I can't think of a better one in this instance. Lifegame is, by the end, sort of like one of those cheerful circles in which everyone's sitting on the lap of the person behind them.
Of course, this still being me, there's an edge of crossness to my experience: crossness at the standard-issue live art rejection of theatre, as characterised by Marina Abramovic's (literally) hateful comments in this interview with Robert Ayers, which in the aftermath of tonight's show seem not much more than stupid; at everyone who's ever spun the idiotic line about the supposed 'passivity' of the theatre audience, as if that condition were a structurally embedded and insoluble predicament, rather than reflective of a weakness in the artists' conceptualisation of theatre-making as an act; and at the immense amount of critical verbiage being expended on BAC's current season of one-on-one performance -- much of which work is, I'm sure, fascinating and worthy of discussion, but all of which is necessarily predicated on a refusal to engage with theatre's (increasingly?) difficult aspects of communality and sociality, as signally privileged over the individual experience. Lifegame does not behave itself militantly in relation to any of these questions, but in its every gesture it gently rearticulates them all, to very great effect. In saying I was moved by the show I would want all of the fractional meanings of 'moved' to come through.
But I'm not cross, not really. I just wish everyone who thinks a two-hour theatre show on a traditional pros arch stage can't possibly be earning its milk would go and see Lifegame. Improbable probably wouldn't tell you this, but, honestly, right now, it couldn't matter more.
Posted by Chris Goode at 11:12 PM

Actually, it's worth examining the whole event experience in BAC's One-on-One festival, it's rather better than you'd imagine. You buy a ticket for the night. Everyone has 3 or 4 pieces scheduled for them over the course of the night and no one has the same journey. In between times, people find themselves hanging and some things emerge to facilitate connection and conversation: everyone is transparently in the same boat, having done something a bit like you that only they know about and may be curious to hear your stories back; even the roughest pieces still have to acknowledge and respond to your presence and, crudely, get you used to speaking to strangers; there's no reason to run around madcap because it's all programmed. (And I wouldn't make any grand claims for it, but there's a piece I'm helping operate that was programmed partly to help facilitate connection). However it happens, there is definitely an ease and a warmth in the atmosphere in the building that I haven't experienced before, and certainly a collective connection. Not that the critics are talking about that, agreed.

And damn that it means I can't see Lifegame this time round.

thanks for this, a useful corrective to my rather crude rant on the front page. I don't know why I was so cross about One-on-One all of a sudden -- I certainly don't object to that mode of work: just a little to the bandwagon ballet that suggests that this (or whatever else) is the future of theatre, while people standing on stage doing acting is horribly retrograde, when actually the latter may be more progressively engaged with the freshly and radically experiential than is the former.

I suppose if I have a remaining concern it is that it is the collective experience of a single framed piece that most interests me, and/or the ways in which individual experiences might or might not amount to a collective experience. Of course it's good for people to share, to discuss, to swap responses and anecdotes, and this of course amounts to a kind of collective connection. But what I feel is interesting in respect of collective experience "at the theatre" is not the range of or even the circulation of response at the level of anecdote (or testimony, at best), after the show or out of the show frame. I'm interested more specifically in what I guess we might a bit woozily call parallax: the group who are sharing a distinct, singular, framed experience, all at the same time, all in the same place (or small -- not neglible -- variations on the same place), and whose sense of individual/collective experience (and ideally the tension between those two) is formed and activated during rather than after the main body of the event. The experience of parallax requires an effort of collectivity, of a socially extended imagination, which seems to me to go -- consciously, and conscientiously -- beyond the sharing of response as per the broken down tube train chat or whatever.

But I'm not trying to spank this into a Made Point. Just thinking aloud about why what you're describing isn't quite what I think I'm concerned about losing sight of. I might have another go in the morning when I'm not quite so tired and broken down.