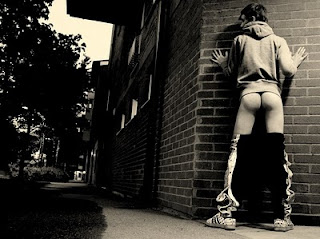 "There comes a time when the operation of the machine is so odious that you cannot even tacitly participate. You've got to place your bodies on the gears, the wheels, all the mechanism, and you've got to indicate to those who own it and those who run it that unless you are free, the machine will be prevented from working at all."
-- U. Utah Phillips
Posted by Chris Goode at 6:55 AM 2 comments:

It's that man again

In this post I regret to say I describe a dream I just had. Usual disclaimers apply: other people's dreams are always unbelievably boring and this is no exception; but I haven't made any of this up, except in so far as I dreamt it. Also I am not quite awake yet so the writing might be low on style.
I dreamed last night that I had landed one of the most prestigious live presenting gigs around, and been selected as host of this year's Smash Hits Poll-Winners Party.
Allotted no rehearsal time, and daunted by the size of the stage, I tried to get my bearings, aware that Phillip Schofield had fallen off the front the year before. Gratefully I discovered as I walked around that, presumably in an effort to avoid repetition of such a debacle, we had been booked into a space where the stage was at floor level and the seats rose in a huge bank at one end.
Having determined how far forward I could walk, I then started to panic about not knowing where the centre line was on the stage. I glanced at my watch. Thirty minutes before showtime. There was still time, if I hurried. And so I set about counting chairs. If I knew how many chairs there were in the front row I could figure out the centre line. ...Except the doors were now open and hundreds of kids were streaming into the auditorium and taking their seats.
I keep counting, trying to remain calm. Some of the kids notice me and cheer. I am thrilled. I salute them. They cheer some more. I worry that actually saluting probably wasn't very cool.
I realise that actually there is seating on three sides, and that none of it, after all, is fixed. The kids are moving the chairs around so that they can sit with their mates. I want to shout at them to sit still, but I persevere with my counting. Having counted the front row (twice) I can calculate the middle. It turns out there is a white sign, already marking the centre. Well, I think, it was good to check.
At this point I realise I am wearing only trousers, in contravention of a memo that had been circulated to all the male performers that, because the temperature of the auditorium is being kept at refrigeration levels for medical reasons, fashionable shirtlessness is not, this year, being encouraged. I have to get back to my dressing room urgently, put on a t-shirt and my red and black tennis shoes.
Annoyingly, my dressing room is down several flights of stairs. I run down them as quickly as possible, jumping recklessly and slamming through fire door after fire door. On one landing, David Mitchell is waiting for me. He starts to essay a wisecrack -- not unkindly meant -- about my being an odd choice for the Smash Hits Poll-Winners Party, but I'm not going to let him bring me down. "I'm in a hurry!" I shout, feeling bad about rushing on. "You'll have to go faster than that!"
He is behind me now -- but I have come through the wrong fire door, one that looked different from all the others. I have ended up at my old school. Orchestra practice is just breaking up. My old history teacher is carrying a bassoon and talking about having once had a fist-fight with the conductor in the car-park. In quick succession I experience the two disappointing, if inevitable, realisations: that I'm never going to get back to the Smash Hits Poll-Winners Party from here; and that I'm dreaming.
Aware that I'm going to wake up any second, and looking down to find a microphone in my right hand, I console myself with a crack at my opening line: "Welcome to the Smash Hits Poll-Winners Par-tyyyyyyyyyyyy!" Wild cheering.
I am awake.
The point of relating all this, mostly, is: ffs, how bloody ubiquitous can David Mitchell be?
Posted by Chris Goode at 8:34 AM 5 comments:

p.s. One sequence in my performance at Tate Modern last Monday involved a spoof interview with a member of Tate staff, for which, in my cheeky satirical way, I invented the job title of 'Director of Visitor Experiences'. A couple of people commented on how well I had managed to stay right on the edge of plausibility with that.
And now here is the inevitable link to a recruitment ad for a new role at Tate Modern, posted on the Guardian jobs site last Friday, four days after my piece.
Posted by Chris Goode at 8:30 AM 1 comment:

Turning the map upside down