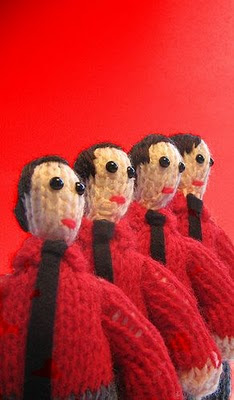 by Cakeyvoice
(I was researching my new piece and wandered off-topic... & finding this has made my day.)
Posted by Chris Goode at 11:09 PM 4 comments:

A knotty little desideratum for a bleak Sunday afternoon. Here's an mp3 of the performance of Michael Basinski's The Germ of Creativity that took place as part of LEAN UPSTREAM at the Toynbee Studios Theatre last November, plus a picture of what we looked like doing it.
For fairly uninteresting reasons I needed to make the audio file accessible somewhere online, so I figured it might as well be here.
It's a pity the recording isn't better balanced -- you get too much of me and not enough, in particular, of Jonny, who was furthest away. Though when he and I performed this piece in Cambridge a deux, it worked the other way around, so I guess this at least balances that out! 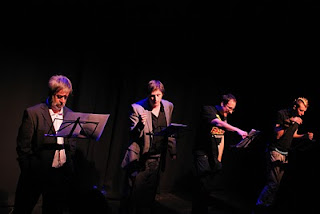 Bad form, I know, to post for a second consecutive weekend something simply lifted from the b3ta newsletter: but this made me laugh so much that Coco Pops came out of my nose, and I haven't eaten Coco Pops for days.
In other news, my attachment at the NT Studio finished yesterday -- on a really positive note, I thought -- it's been truly the most inspiring, invigorating, game-changing couple of months, and I'm really sorry it's over. Next up is a super-busy couple of weeks making Who You Are for Tate Modern, plus a workshop and reading in Loughborough which I'm excited about because I'm going to be trying out some new poems for the first time in a while. Like proper text poems with words in and everything. I'll probably get booed off and chased out of town. Well, that too is something that happens.
Not sure if I'll be back here much or at all in the next couple of weeks, but I have a couple of new things up at Transductions if you miss me.

Just quickly before bed:
I mentioned in my long recent post an email interview that I've been doing over the past year and a bit with the remarkably patient Lawrence Upton.
Suddenly, it's not only finished but published, over at Edmund Hardy's consistently estimable (& let's hope this isn't adjudged a dip!) Intercapillary/Space.
It probably amounts to the fullest, or at least the broadest, account I've yet given of what it is I think I do and what questions underwrite it (unless you count this blog in toto), and though I already disagree with some of what I was saying a year ago when we embarked on the conversation, and am not now in quite the headspace that I was at certain points along the way, nonetheless I'm very pleased with the finished piece and I'm (a) glad to point you towards it, (b) proud that it's where it is, and (c) grateful both to Edmund and, especially, Lawrence, for the opportunity to sound off at such length and with such a sensitive (but not oversensitive) interlocutor.
This afternoon, at the National Theatre Studio, on my watch, three actors, aged between 17 and 45, who are currently appearing at the NT in plays by David Hare and Tamsin Oglesby, performed Michael Basinski's The Germ of Creativity, two visual poems by Jeff Nuttall, and a visual sonnet by yrs truly. What's more, they seemed to enjoy themselves. Hard to know if this amounts to a hill of beans in this crazy mixed-up world: but I think it might, just a bit...
Posted by Chris Goode at 12:23 AM No comments:

Make your day lovelier in less than three minutes

Posted by Chris Goode at 1:39 AM No comments:

Can you guess which kid is doing his own thing?