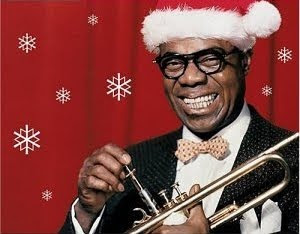 I know, I know. Believe me, I know. You don't come to Thompson's for easy listening. You come here for people who've somehow managed to connect a flange pedal to a cheese grater and are using it to reinterpret the works of Ligeti or Mission of Burma. But that's not what we're about right now, dudes and lady-dudes. I mean, pshaw, you wouldn't like it if you opened window 5 of your 2009 Gummi Bear [TM] Advent Calendar to find that it yielded not the anticipated Gummi Bear [TM] but rather, say, a small knot of razor wire covered in bat poo and dandelion milk. So today I'm very nearly unembarrassed to present a little selection of the loungey, the cocktaily, and the diffidently swingin'.
We begin with a track from the Bert Kaempfert Christmas Album, which I think I mentioned last year was, while I grew up, pretty much the one non-churchy LP available for seasonal spinning from the surprisingly extensive record collection of the Paternal Thompson Whom God Preserve. Those tinkledy-binkledy bells and the thunkity-plunkity bass have me back at the foot of the Goode family Christmas tree faster than Marcel Proust in a Santa hat could offer me a mint choc chip madeleine. You know me -- cosmopolitan, adventurous, a true global citizen -- but if there is anywhere on this planet a territory where Christmas doesn't sound like Bert Kaempfert going tinkledy-binkledy thunkity-plunkity, then I don't want to hear about it.
After a near-inevitable turn from Satchmo, we arrive at a curious number from Ella Fitzgerald -- a sweet but slight ditty which I find incredibly bothersome in Freudian terms. Santa got stuck -- open brackets -- in your chimney -- close brackets? Really? -- I mean, obviously not really really, but... that's what we're going to write a song about? And this isn't in any way... weird? What's worse, it sticks in your head like Montelimar nougat in your molars.
Then we have another Louis -- Mr Prima of that ilk, the under-appreciated bandleader who remains best known to us all as the voice of King Louie, the singer of "I Wanna Be Like You" in The Jungle Book -- before things take an odd turn with pastiche loungeur Richard Cheese (an American Mike Flowers, kinda) essaying an infectious, if not downright toxic, rendition of Depeche Mode's "Personal Jesus". And finally, techno non-celebrity John Beltran posts a spiffy remix of Bing & Ella's "Rudolph the Red-Nosed Reindeer". This species of overhauled easy-listening classics for the ironic cocktail generation tends to produce dud after dud but I genuinely really like the effect Beltran achieves by looping two bars of the band -- the resulting track lopes along restlessly and, I find, makes a person's foot tap. (Well, it's Christmas. Caution to the wind, eh?)
So, there we are: hope you find something to enjoy today -- and let me warn you that you won't want to miss tomorrow. Unless, that is, you are a horrid old Scrooge with a pocket full of humbugs and a silly nightcap. Have a nice day, all!
Track listing:
1 Bert Kaempfert: Jumpin' Jiminy Christmas
2 Louis Armstrong: Cool Yule
3 Ella Fitzgerald: Santa Claus Got Stuck (In My Chimney)
4 Louis Prima: Shake Hands With Santa Claus
5 Richard Cheese: Personal Jesus
6 Bing Crosby & Ella Fitzgerald: Rudolf the Red-Nosed Reindeer (John Beltran remix)
Posted by Chris Goode at 7:00 AM