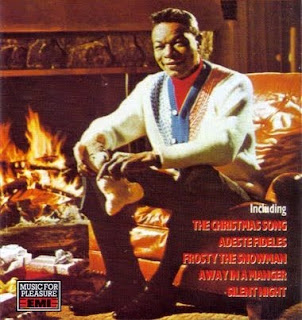 Nothing -- well, almost nothing... I mean, a talking candy-covered reindeer dragging behind it a plastic hamper containing gold, Frankenstein, myrrh, mistletoe & wine, and some kind of novelty windscreen-de-icing device for that despised uncle in your life -- but aside from that -- nothing says "Christmas" like a weak pun.
And so, welcome to December 4th, in which tracks by three gentlemen named or nicknamed 'King' are pressed into the service of an unconscionably feeble reference to a carol known to generations of schoolpersons only in a scurrilous parody version involving the sounding of hooters.
I was thinking just yesterday about my starring performance as Caspar (bling-bringing Wise Man #1, innit) in the school nativity play at the age of 6. I had an orange cardboard crown with a single little staple holding its intricacies all together; I can still remember the tiny, slightly rusted dark blue stapler with which the job was done -- the sweetness of which vertiginously nostalgic memory is tempered by the fact that the storage of this snapshot is presumably taking up RAM that might perhaps more helpfully contain other data that I would like to be able to remember, such as my credit card PIN or the date of my dad's birthday. In which light I was similarly both delighted and dismayed to note that I could remember my first line in the script: "I have come from far off lands, over fields and mountains, to be here with you. But why are you all so sad?" -- Or at least, I was delighted and dismayed (etc.) until I realised that the question "But why are you all so sad?" is entirely inappropriate to the nativity scene. I'm now pretty sure that must have been the end of my first line in Snow White and the Seven Dwarfs the following year. That was the year I lied to the entire class that I knew how to tapdance -- I didn't at all, not a bit, I had merely been fascinated by Roy Castle's teatime tapdancing on Record Breakers -- and ended up being made to choreograph a tap routine for all the dwarfs to undertake. Many if not all of them were costumed in wellington boots. It was not a proud episode.
But I'm rambling now, like some ancient heap of a great auntie who, having insisted on everyone watching the Queen's Speech, nods off during it, overcome by the cumulative effect of four Baileys chocolates, and spends the next hour of the afternoon drooling and muttering in her fartful slumbers about the evils of decimalization and the loveliness of Jim Reeves. What else is there to say, though? None of these tracks requires further introduction.
I suppose I might issue a reassuring blandishment to those of you who may be privately fretting that, already, on only the fourth day of this recklessly otiose project, the bottom of the barrel is already being worn down thinner than the paper hat in a Tesco's Economy Cracker. Know, my dears, that this whole escapade has already been charted in advance, and that the best is being saved for later, as the big day draws nigh. At the moment, strictly speaking, you shouldn't even really be feeling Christmassy at all, and if today's tracks can do anything in helping to achieve that, then my time won't have been spent in vain.
Tomorrow, though! Ah, you won't want to miss tomorrow.
Track listing:
1 Ben E. King: Little Drummer Boy
2 Nat 'King' Cole: All I Want For Christmas Is My Two Front Teeth
3 B.B. King: Christmas Celebration
Posted by Chris Goode at 7:00 AM

I read your blog with interest.

The play from Marvin and the Cats will be presented at the Greenwich Playhouse from 19th January to 7th February.

Using climate change as a starting point, the play explores society’s different responses to the gradual warming of the planet. The Forecast presents a bitter-sweet tale of survival on a globe running out of steam.

I would send you our flyer and release if you are interested. Perhaps you could even post something on your blog with a picture?

Looking forward to hearing from you.