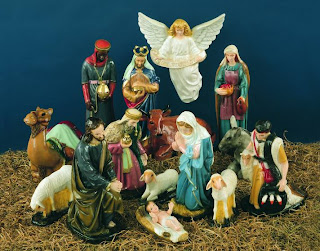 Wow! We made it, kids. You know there was a time there, back around Day 10, when I really thought we'd never get here. But we have: and to thank you for your company and, frankly, your patience over the last three-and-a-half weeks, here, at long last, are some songs that I can actually, hand on heart, say I think are worth your attention this Christmas Eve, as you tackle the last of the halls-decking and gay-apparel-donning.
I decided to approach this exercise as a kind of Desert Island Discs of Christmas records, which is how I settled on eight songs, rather than, say, 243. There are a couple of tracks that I probably would have wanted to include here had I not already used them up earlier in the season. And probably my favourite Christmas song of all -- almost needless to say, "Fairytale of New York" -- is missing, because it's not as if that isn't going to find your ears without my assistance.
So, here's what we have instead:
'Just Like Christmas', from the Low Christmas E.P. -- because what's Christmas without an Optigan chugging along behind it? (There's still time to buy me one, if you like. No need to wrap it.)
'I Saw Three Ships' is a favourite carol from childhood -- I think the Paternal Thompson Whom God Preserve used to whistle it around the house. I particularly love this version by Sufjan Stevens, which has a nice wheezy rough-edged feel to it. As, of course, do I.
The just-released Bob Dylan Christmas album, Christmas in the Heart, has considerably brightened my December, and this opening track in particular, on which Bob comes across as exactly fifty per cent mall-grotto Santa and exactly fifty per cent weaselly old drunk foraging in the bins round the back for whatever leftover KFC somebody may have tossed. I'm very much looking forward to the follow-up album, New Year's Eve in the Liver.
The Nilsson track has almost nothing Christmassy about it except its glued-on subtitle, "(Christmas)", which I suspect, though I don't know, was something of an afterthought. Those sleigh bells on the track itself similarly seem like a late addition, to lend some commercial viability to what would otherwise be the most deplorably nostalgic, disengaged, self-indulgent song ever recorded. Odd that it takes that little extra sprinkle of sugar to make it feel a bit less cloying than it otherwise would.
The Qualities track nearly ended up in yesterday's bag of Mis-Shapes, but I thought it deserved a better fate. It's a massively peculiar bid for commercial success from a bandleader who was certainly no stranger to the massively peculiar, namely Sun Ra. It's doowop, Jim, but not quite as we know it. Sometimes I think all Christmas songs should sound like this. (Note for Wire readers and their ilk: Sun Ra scholar Robert L. Campbell notes that "Anthony Braxton is threatening to use this record in a course on Sun Ra, Karlheinz Stockhausen, and Hildegard of Bingen.")
I thought I should chuck in one proper-bo mainstream Christmas hit; I begin to think my principal affections are actually torn between Wizzard's "I Wish It Could Be Christmas Every Day" (horribly underrated as a band, yer Wizzard) and Shakin' Stevens's "Merry Christmas Everyone", which we used last year in the show At Home and suddenly revealed itself as a work of considerable majesty. But rather than either of these, I've gone with Jona Lewie because this song seems to be fading a bit from popular memory, but deserves to be cherished a while longer. Good egg, Jona Lewie.
In case anyone thought a cynical approach to Christmas marketing opportunities was a relatively recent development, may I refer you to the appearance here of The Seekers' "Morningtown Ride"? This song, in its original Christmas-free version, would be primus inter pares of my non-seasonal Desert Island Discs, if anybody ever asked. But it wasn't until I started researching this year's Calendar that I discovered the existence of this cash-in festive version, with added sleigh bells and cursory alterations to the lyrics. The worst of it is, I can only keep up my prim high dudgeon about the whole thing for about four seconds before the song works its irresistible magic and I am blubbing like Jana Novotna.
And finally, my dears, we end as we began all those days ago, with the Muppets. What else?
Kermit's right, folks, there's only one more sleep till Christmas. Plus maybe a little nap this afternoon in front of whatever they put on these days instead of Disney Time. Ah, it's a little sad to have come to the end of this project.* But, how pleasant it's been. Again, my thanks for taking the trouble to enjoy it, if you have, and for leaving comments and sending emails, if you have, and God bless us every one.
p.s. This one's for you, Molly. Welcome to the world.
Track listing:
1 Low: Just Like Christmas
2 Sufjan Stevens: I Saw Three Ships
3 Bob Dylan: Here Comes Santa Claus
4 Harry Nilsson: Remember (Christmas)
5 The Qualities: It's Christmas Time
6 Jona Lewie: Stop the Cavalry
7 The Seekers: Morningtown Ride to Christmas
8 The Muppets: One More Sleep Till Christmas
* (Memo to self: Do not, under any circumstances, forget that this has been a colossally gross and torturous waste of time. Do not, do not, do not do it again next year.)
Posted by Chris Goode at 7:00 AM

bring me the furtive 50

At this very moment I'm collating the votes of the international juries, honeybun. We got a bit bogged down with some irregularities in Lichtenstein. I think if you were to check back late tomorrow night, you might be in luck. xx