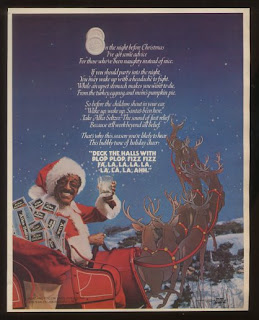 Well, boys and girls, we're getting awfully close to the big day. I've got to pack up my troubles this morning and head back to the homestead of the Paternal Thompson Whom God Preserve, for our annual week-long festival of politic tongue-biting. (Not each other's -- that would be weird.) So, to jolly us all along, here are a few of the evergreen legends of yesterdecade, without whose recordings no Advent Calendar could possibly be considered complete.
You may not think Andy Williams is an evergreen legend. You may think the Republican son-of-a-gun is looking decidely deciduous these days. You may in fact think you don't give a figgy pudding about Andy Williams. But are you going to be the one to tell him that 'mistletoe' isn't a verb? No, thought not. I mean, gee, he sounds so upbeat about Christmas. Maybe that's because he gets a bunch of royalties every Christmas because he sang this song about how upbeat he feels about Christmas. Who can say.
Spike Jones: now there was a guy who really understood the principles and premises of joy, and moreover knew better than anyone what they sounded like. There's next to none of his customary orchestral goofage in this track -- it's just an ever-so-slightly, but wholly amiably, tongue-in-cheek rendition of the Leroy Anderson classic. Spiffy. And then we have, back-to-back, two of the greatest, most imitated but most inimitable, American entertainers of the last century: both vaudevillians by background and instinct, but both brilliantly adaptable throughout long careers and still generally regarded with great affection. Durante owns 'Frosty the Snowman', and Davis seems to elevate 'Jingle Bells' to a work of ecstatic art.
Finally, a cute little bonus track: Bing Crosby stumbles over a moment of syncopation in a recording of 'Jingle Bells' with the Andrews Sisters, and there's something nice about hearing the whole thing go to pieces. Even the best of us can't get through Christmas without a mishap or two.
Tomorrow, one last vertiginous descent from the sublime to the... hmm... the less sublime. See you in the morning. xx
Track listing:
1 Andy Williams: The Most Wonderful Time of the Year
2 Spike Jones and his City Slickers: Sleigh Ride
3 Jimmy Durante: Frosty the Snowman
4 Sammy Davis Jr.: Jingle Bells
5 Bing Crosby & the Andrews Sisters: Jingle Bells (outtake)
Posted by Chris Goode at 7:00 AM