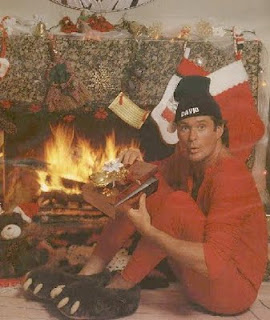 As so often, in compiling this feature, I have found myself, for the most part, rather deplorably turned towards America, as if the U.S. of Whatever had invented Christmas. Nonsense! Obviously we have America to thank for all the stuff that's any actual fun. But, just for a day, let us instead turn our attentions to Europe, and more particularly, to Germany.
Regrettably I've never experienced the magic of a German Christmas, but from what I can piece together, it goes something like this: make everything (including furniture and napkins) out of marzipan and (if absolutely necessary) nuts; practise naturism wherever possible; exchange disturbing gifts made out of black birch twigs; and listen to the following four songs on heavy rotation.
In Germany, David Hasselhoff is a living god. This is because a single word from 'The Hoff' brought down the hated Berlin Wall. "Freiheit!", he cried, and the rest is history. All German families are now legally compelled to listen to the David Hasselhoff Christmas album, The Night Before Christmas, from which this emphatic version of 'Deck the Halls' is taken. More observant families genuflect before a life-size cut-out of Hasselhoff on Christmas Eve, in the belief that this will bring them luck and enhance their fertility -- beliefs that are, in fact, backed up by a notable amount of empirical data and peer-reviewed research.
Two related German phenomena, both widely loved beyond the borders of their native land, are Nicole, winner of the 1982 Eurovision Song Contest and subsequently the 1985 Nobel Peace Prize (surprisingly, it must be said, to many, as Nicole had only weeks earlier declared war on Turkey); and Father Abraham, the pioneering genetic scientist who created a race of blue homunculi in vitro in 1977 and named them Die Schlümpfe after the sound they made climbing out of a trifle into which they had accidentally been mixed by careless laboratory technicians. (For more interesting information about Die Schlümpfe, see The Holy Book of the Smurfs.) Not many people are aware, however, that these two icons of contemporary German culture are, in fact, man and wife; even fewer are aware of the shocking truth about which is which.
Finally, we hear from Peter Schilling, who became Germany's biggest-ever pop star in 1983 with his track "Major Tom", inspired by a reverse premonition he had about a David Bowie song. This version of "Silent Night", from his album Error in the System, continues to perplex and confound psychologists, as it has been proved to be literally impossible to listen to it without imagining that the words are being whispered directly in your ear by a near-naked Udo Kier while you're trying to get some sleep in a cheap Berlin motel.
And that, my dears, is everything you need to know about Christmas in Germany. Tomorrow, it's back to America. For, as Confucius says: Automobile in America. Chromium steel in America. Etc.
Zum Wohl! xx
Track listing:
1 David Hasselhoff: Deck the Halls
2 Nicole: Kling, Gloeckchen, Klingelingeling
3 Vader Abraham & die Schlümpfe: O Tannenbaum
4 Peter Schilling: Stille Nacht, Heilige Nacht
Posted by Chris Goode at 7:00 AM