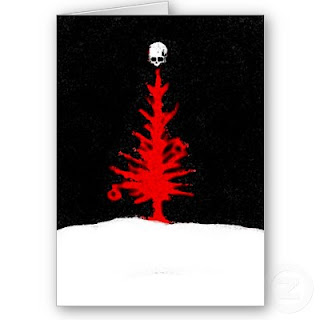 Yeah so anyway Jesus came to me in a dream and he said dawg I'm just totally bummed out by all these wack Christmas songs you keep posting with all the little animals and shit. It's like totally not cool. Like I really made an effort with how I lived and stuff and I just kind of think it would be better if you celebrated my birthday with something a bit more I dunno just a bit less stupid and lame and everything.
So I said Jesus man I totally get you guy I wasn't trying to put anybody down or nuthin, and I'm like, what would you like instead? And get this, OK, Jesus kind of goes a little bit red and looks down at the ground and he says, have you got anything more kind of like alternative or whatever?
I'm like for shoes bro, no sweat. Like there's this super-sweet Fall track from like '94 or something, from off of a Peel session. I think it's really great. But Jesus said, I dunno man, I don't really dig any Fall after round about Bend Sinister. So I'm like, no problemo my messiah, I got some Shonen Knife, everybody likes Shonen Knife. But Jesus is all like meh.
So I'm like well how about Cocteau Twins? You've got to know their version of 'Winter Wonderland', right amigo? And he's all like, yeah, I know that, it's OK I guess, I mean it's kind of like Eurythmics or something. So I'm like (a), Eurythmics totally ripped off Cocteau Twins version, as did Grandaddy while we're on the subject, and (b) anyway I can feel some retro love for Eurythmics, man their early stuff is the bomb, the first two or three albums. But he's all kind of like I dunno guy, Cocteau Twins seems like it's kind of like fake alternative preppy shit for people who drink Starbucks Gingerbread Latte and get their cards at fuckin Paperchase or some shit.
So by this time I'm getting a little bit y'know teed off with all this negativity coming off of Jesus, because his whole m.o. is supposed to be about positivity, right, and looking on the bright side of life and whatever, and particularly at Christmas which is basically a whole fuckin holiday named after him, and how many people get that? Like it's him and Martin Luther King pretty much. So I'm like OK well if Cocteau Twins is too yuppie for you then how about some Deerhoof bro? Or some Animal Collective even? This shit is contemporary, really, check it, it's some gnarly shit, J-boy.
But Jesus kind of sighs and looks downcast or whatever and he looks like he's about to say something and then he doesn't and I'm like woah, dude, it's totally supercool man, whatever, just say what's on your mind, guy. And he flushes a little bit red again and he looks down at his flip-flops and he's like, I dunno, man, like, don't you have any, like... And he swallows a little bit awkwardly, and then he says, like, don't you have any, like, Pansy Division or something?
And I'm like, penny drops, right? Like, wow. Jesus totally digs the queercore shit. So I'm like, sure, I got some Pansys. And he's like, that's cool man. And then he kind of comes over to me and he's all like shy and everything, but then he like starts totally licking my face and stuff. Just licking my cheek and my lips all over and my nose and everything. And it's really hot. Like I'm getting licked on the face by Jesus, who is like someone I used to pray to and everything when I was a kid.
And then I'm all like, oh, wait, this is totally a dream, isn't it, and as soon as I think that, I wake up, and the dog's on my bed, licking my face, and I'm like, woah, Snuffy, quit licking my face, you stupid dog, and then I realise that Snuffy has like this fuckin halo, like he totally just has this ring of light, this aura all round his head and stuff, and I'm like, wow, maybe Snuffy's actually Jesus. Which totally blows my mind.
Christmas really is an awesome time of year.
Track listing:
1 The Fall: Hark The Herald Angels Sing
2 Shonen Knife: Space Christmas
3 Cocteau Twins: Winter Wonderland
4 Deerhoof: Xmas Tree
5 Animal Collective: Winter Wonder Land
6 Pansy Division: Homo Christmas
Posted by Chris Goode at 7:00 AM