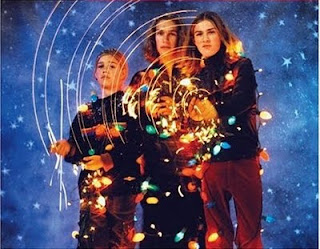 Sigh. When did the magic go out of Christmas? I'll tell you when. I'll tell you exactly when. With the invention of the stylophone. Oh, sure, it's all retro-tastic now, isn't it, the stylophone? Can't have a bad word said about it. But it was the thin end of the wedge, I tell you. Suddenly everyone could have space-age music technology in their bedrooms. Oh, sure, it's a fair cop: as a kid I too had a Yamaha keyboard with one-finger chord facility and a headspinning 99 rhythms. (Who, for the love of God, needs access to two different cajun rhythms within six feet of their bed?) And so, spool forward (if you will) to 2009, and already you can't move around here for marauding bands of eight year olds turning up on your doorstep with their Kaoss Pads and their Gristleism boxes, creating around their raggedy-ass renditions of 'Away in a Manger' a soundworld not dissimilar to the mid-80s heyday of Shriekback or Nitzer Ebb.
May I lay before you, then, an almost entirely instrument-free selection of carols and standards. (One saxophone solo sneaks through, the bastard.) Christmas, after all, is the rightful home of a cappella -- when else in the year could the Flying Pickets ever have had a number one single?
We begin in the cheerful realm of unaccompanied folk singing about shepherds; move suavely into the swirling harmonic caramel of the Singers Unlimited (whose bassist here, btw, is the guy who went "Ho! ho! ho!" -- though not in a Santa stylee -- on the old Green Giant ads); endure a minute or two in the company of Hanson (the only surviving relic from a boyband-themed day in which I very quickly lost interest); and end up in the loving embrace of the genre's current grandmasters, Take 6, whom thirtysomething Brits may recall more fondly as the grotesquely maligned (and presumably unwitting) house band on Victor Lewis Smith's Radio 1 shows in the very early 90s.
Enjoy these voices in all their voluptuous nudity, and I'll be back tomorrow with an entirely different kettle of festive fish.
Track listing:
1 Finest Kind: While Shepherds Watched Their Flocks By Night
2 Singers Unlimited: It Came Upon A Midnight Clear
3 Hanson: White Christmas
4 Take 6: Let It Snow! Let It Snow! Let It Snow!
Posted by Chris Goode at 7:00 AM