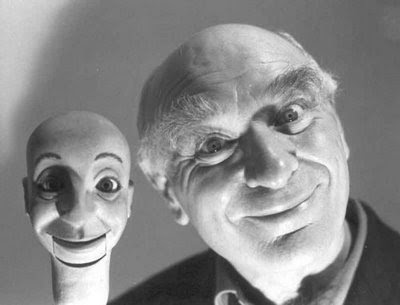 Or, better still, be your own audio clip: throw open the window this instant, orient yourself in roughly the direction of the Headmaster's office, and declaim into the wind and rain the closing lines of Furtive Nudist -- to be spoken, as they are written, in ALL CAPS. How can one speak of it any less full-throatedly? Ken Campbell is fucking dead. Thankfully, theatre is far more expansive than life and death (a suspicious looking binary if ever I saw one), and every full stop is just a hyphen coming straight at you. Thus: all together now:
YOU'VE GOT TO GET HOLD OF THE THREAD OF MARCHING TIME AND PULL THE FUCK THING DOWN AND GET ON IT AND PANG YOURSELF TO THE INFINITUDE OF ABSOLUTE MIND.
Posted by Chris Goode at 8:14 PM

What an amazing post. I was so sad to hear he had died, somehow reading what you wrote reminds me how insanely full of life he was, and makes it feel much more likely that he just went through a wall to another, stranger place.

Directions if coming by tube:
http://tinyurl.com/64hy5t

Thanks for the brilliant obit, which brings back Ken's inimitable spirit beautifully. Also thanks for the kind words re my one-minute version of The Warp, which I made with the riproaring advice of Neil Oram -sadly I never met Ken. (BTW the Miniatures album was just reissued by Cherry Red Records). RIP Ken, or should I say let RIP, or RIProar, wherever ye may be.

“I’m the producer/director of the Ken Campbell documentary, ‘Antic Visionary’. I screened the docu three times, in London, and made many efforts to distribute but sadly, no one was interested at the time. It would indeed be a great tribute to Ken to get it out there. Maybe that can still happen… [ . . . ]
Ken was a dear friend and will be missed. He was one of a kind. [ . . . ] Let’s hope… If word gets out there that there is a film on his life, maybe someone will be interested in it. As far as I know, there is no other film or TV show about Ken that tracks his work from the Roadshow days to his one man shows. ”

Well, here’s hoping. And the TV broadcast of “School For Clowns” would make a nice DVD extra.

During rehearsals for the 1999 Warp, as no doubt on other occasions, Ken would declare some piece of advice a principle of stagecraft. "Good!", he said, when he saw me writing them down. Here are the ones I caught, in my own words and no particular order:

Never cross upstage of someone.

For emphasis, echo the last word of your cue. make it a response.

Never throw away any line.

Find reasons to look away from the other actor.

The straight man is to the left and slightly downstage of the comic.

Action goes before the words that describe it.

Never talk on the move. Speak, move to where you want to go, speak again.

Never take out on the line. Speak, take out, come back in, speak again.

Never pause just for the hell of it. All pauses are for decisions.

A long speech is long because the first line didn't work.

When I got back from the burial last night I felt, for the first time in years, really angry and lonely.

Having shoveled earth on the coffin, was finally forced to accept Campbell really was dead after all.

And coming across this, written & read by Alan Moore, had me sobbing, not just for the dead Wilsons but for KC:
http://tinyurl.com/64sfjp

Great stuff. I have some photos of Ken and memories on my blog.

Thank you for writing this.