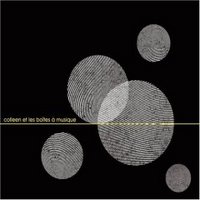 The lovely Cecile Schott has been launching her poised and distinctive music out towards the frayed edges of the troposphere for three or four years now I suppose, to much quiet acclaim, and this year's release (officially an EP, I think, but easily substantial enough to warrant inclusion here) is another beaut. The high concept -- not that high, I suppose -- is that all of the sounds here gathered are derived from music boxes of evidently various size and vintage. The last high profile co-option of music boxes was probably Bjork's makeles Vespertine (and an ear should also be lent to John Morton's worthwhile Outlier, from around the same time, which incorporates music boxes into small chamber settings), but unlike those recordings, Colleen's is populated entirely by music boxes, which then are not used for fairydusting more conventional or variegated textures, but for a conversation instead among themselves and for once in their own right. The most attractive consequence of that is that the usual nursery connotations (and, right behind them, the inevitable secondary redolence of spooky John Wyndham goings-on) play themselves out very early on, and you are therefore quite quickly impelled into a relation with these sounds, rather than with whatever it is they remind you of. As often happens with Colleen, I find myself pondering the time element of music and the ambivalent relationship of these serenely circulating pieces to memory: to the way that we relate music, even as we're hearing it for the first time, to other music we know, and to what we've only just found out about this present music, so that often you're pre-emptively recalling what you're about to hear: which is particularly interesting in how it connects with an instinctive, almost infantile, concern for pattern recognition and disturbance. So that there is something nostalgic, something harking back to childhood experience, about this music that is quite separate from the associations of the music box itself. After all, how many of us actually had a music box or anything similar as children? I don't think I owned a music box until I was nineteen. (Now I have one by my bed that plays the Ode to Joy from Beethoven's 9th.) But I'm digressing. This is a truly captivating album, made with immense care and a rare and trustworthy restraint: so that when, in "What is a Componium? - Part 2", she allows the layering to really stack up for once, the sudden plenitude is moving and inspires a genuine gratitude. And how seldom that happens, that at the end of an album you want to write and say 'thank you for having me'. 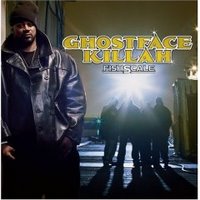 Yeah, no, this isn't the same thing as Colleen. One of my most purely enjoyable experiences of the past year having been working on Rhymes, Reasons and Bomb-Ass Beatz with Harold Finley, and rediscovering the immense pleasures of Grandmaster Flash and Rammellzee and such like. But I've never been a close follower of rap and hip-hop, except when some clever or mouldbreaking record hit the singles charts; like most remotely liberal lower-middle-class white suburban kids I got into Public Enemy and the Disposable Heroes (and of course the beloved Dream Warriors) as a student, but that was about it: at least until cLOUDDEAD popped up a few years ago, and all the genuinely perspective-shifting stuff that started coming out of Anticon: which was fantastic but clearly lacked the crystal ping of authenticity. Then into my life, like Byron's Assyrian wolf, came Ghostface. Oh good Lord, this is a magnificent album: confident, punchy, brilliantly controlled, and so widescreen it goes all the way round, joining up somewhere behind you and enveloping you in his sensational drama. The MF Doom-produced tracks are the highlights for me, perhaps above all the irresistible 'Jellyfish'; the opener, 'Shakey Dog', is also unyieldingly gripping, both in its narrative and the immensity of its sound. These big harmonic breezeblock walls are familiar to me from some of Why? and Odd Nosdam's recent output but there's no denying that Ghostface takes it to another level, and all you can do is capitulate like the sissy you are: it's like mid-period Scorsese in its drive, its scope and its stunning determination to leave you punchdrunk and blissed out. That hidden bonus track at the end there isn't on the disc, guys, that's just the tweety-birds circling your head.

#18 Bruce Springsteen, We Shall Overcome: The Seeger Sessions 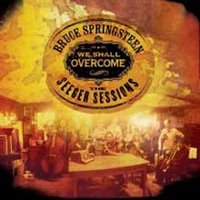 You can't exactly set your watch by it, but you can pretty much bet that once every decade, Bruce Springsteen will do something genuinely interesting, and that nobody else could do in quite the same way. In the 80s it was the heartstopping Nebraska; about ten years ago, the low-key humane vision of The Ghost Of Tom Joad; and now, making more explicit the thread of aim and inheritance that runs through both those sets, we have We Shall Overcome: and a fine, distinguished job it is, too. The album would probably earn its place in this top 50 just from its orientation towards the legacy of Pete Seeger (still, almost unbelievably, alive, and apparently relatively robust, in his 88th year: and for the time being, therefore, beyond a doubt America's greatest living son and most exemplary patriot). But what secures my admiration for this project is that Springsteen manages to capture, albeit in a somewhat updated and mildly underwrought context, the fiercely celebratory and optimistic side of Seeger's work. None of the songs collected here sound worthy or over-revered in these capably made versions, all are animated and turned towards the light. As I have suggested, though, it's the popular singalongs that really make this album work: the informal, slightly ramshackle, plainly authentic, pointedly important glee of "Old Dan Tucker" and "Jacob's Ladder"; compared to these, the almost keynote "We Shall Overcome" seems slightly undercooked and over-choreographed: but on the whole, little detracts -- and certainly no starriness -- from the political cogency and social generosity of these songs, and the countless stories of courage and civic decency that underscore them. Those who loved Springsteen for what they took to be the message of his "Born in the USA" era have apparently hated and rejected this new record, and it's easy to see why, though the reasons that the supporting tour has been so sparsely attended are more complex and perhaps somewhat to do with Springsteen himself. But any such quarrels are dwarfed by his achievement here in identifying an urgent task and carrying it out in good faith and to unmistakeably great effect. 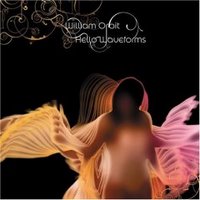 I first heard this album without knowing what it was or paying particularly close attention to it, and assumed that it dated from ten years ago or so; even on closer ear-inspection, with some of the production felicities revealing more up-to-date origins, the soundworld, the mood, the apparent intent all continue to feel some considerable distance behind the zeitgeist. Well, good, I suppose: the zeitgeist's rubbish, it's full of The Magic Numbers and people shouting their gobs off about Cillit Bang. Anyway, William Orbit's 50 now and Madonna presumably still has him on speed-dial so this was never going to sound like Kode9. In fact, like almost everything of Orbit's I've ever heard (up to and including the John Cage cover on Pieces in a Modern Style), Hello Waveforms mostly sounds like an advert for Nurofen Liquid Capsules. What makes this album exceedingly likeable, though, rather than the risibly outmoded ambient gloop I seem to be describing, is that Orbit is very, very good. In this case, what that means is not just that there is something deeply satisfying about a musician who knows exactly what he wants to do and has the requisite skill and means to do it -- this is true, but I don't expect you to be stirred by me singing "The hills are alive with the sound of professional competence" while drooping edelweiss and dubious goatherds stand all about me...; it's also that Orbit has an extremely sophisticated understanding (yeah, all right, perhaps a businessman's understanding) of the different ways in which people now use music. Hello Waveforms really comes into its own on an iPod, walking over London Bridge at 9:30 on a spring morning: its encounters with the casually brutal dynamics of metropolitan vectors and currents are revivifying and protective not, after all, in an analgesic way, but liberatingly and extrovertly. Elevator music, in the best sense: and a record I've gladly returned to over and over all year long. (Though I skip the tracks with vocals. You're allowed. It doesn't make you a bad person.) 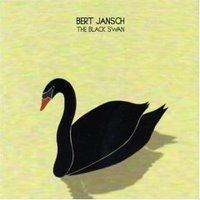 Perhaps there are similarities with the Orbit here. The Black Swan almost goes out of its way not to be an event, not to elicit too much critical fanfare or rapturous reception. Bert Jansch is now such an eminent figure (though a perfectly self-effacing one) among British folk artists and singer-songwriters that the level of anticipation around new releases must be an unmanageable shadow for him to contend with. Some reviews of The Black Swan were muted, a little crestfallen even: but this is an album that would disappoint only the eager and the short-of-attention. Certainly, the songs are in a fairly simple mode (I don't mean tonally) and everything is pretty level, there is little drama and not much surface tension. But woven through this set is everything that has steadily augmented Jansch's reputation among new generations since the headiness of his late 60s emergence onto a wider stage. Nothing is wasted, nothing is specious, nothing is in the service of advertisement. The songs themselves may not imprint themselves on the mind or the heart by sheer force of personality: but the vocal styling is familiarly compelling, the arrangements are almost perfectly judged, and of course at the centre of it all is Jansch's guitar. I'm not a guitarist (despite some occasional efforts in that direction, all lamentably unsustained) but I don't think you need expertise yourself to be able to tell how amazingly good this man is. Along with Martin Carthy and Davey Graham, and of course Dick Gaughan and perhaps Nic Jones, he belongs on the upper deck of the pantheon. (Which for some reason I seem to have imagined in the form of a Routemaster. Hm.) So, yes, you get the feeling -- and you have the certain knowledge, of course -- that Jansch could go further, could push boundaries, could take us places we've never been. But whatever it is we're drawn in to when we lean in to catch the full and careful beauty of The Black Swan, that's an unfamiliar enough place to be going on with.
Posted by Chris Goode at 10:13 PM

We didn't have music boxes as children, but I think they turned up quite a bit in what we watched and heard. When we were children other people decided that this might be the sound of childhood. This and folk music. simon