The finger and the moon

This was going to be the introduction to a much bigger post that I don't now think I'm ever going to write, so rather than let it languish in Drafts Purgatory I thought I'd post this little bit on its own :)


Look! Come quickly! Wallace Shawn is pointing at the moon! 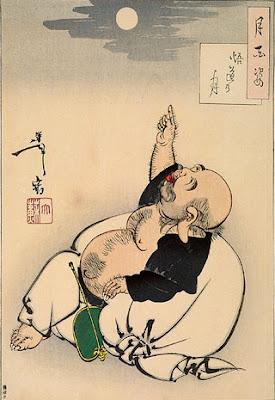 Oh, all right, it's not really Wallace Shawn. (So they say.) It's Budai (or Hotei), the Laughing Buddha. He's pointing at the moon to remind us about a story from the Shurangama Sutra:

The Buddha told Ánanda, "You and others like you still listen to the Dharma with the conditioned mind, and so the Dharma becomes conditioned as well, and you do not obtain the Dharma-nature. This is similar to a person pointing his finger at the moon to show it to someone else. Guided by the finger, the other person should see the moon. If he looks at the finger instead and mistakes it for the moon, he loses not only the moon but the finger also. Why, because he mistakes the pointing finger for the bright moon.

This is a big moment for The Buddha because he's making a point that's going to end up in Enter the Dragon:

(How much more fun the Shurangama Sutra would be if that story began: 'The Buddha told Ánanda, "Kick me!"')

We've started, a little unexpectedly perhaps, in the world of Buddhist teaching and martial arts, because I was interested to try and discover the origins of a proposition contained in remarks made during a recent talk by Ken Robinson: a sermon on 'passion', as part of the popular series of secular sermons at the Conway Hall in London, organized by the excellent School of Life. Robinson is someone who keeps popping up lately, though I only really started paying attention when a few people on Twitter made a fuss, rightly, about this gorgeous animated film based on a recent Robinson talk on the premises and structures of education: it's startlingly cogent and ultimately rather moving.

I really recommend watching the whole of Robinson's sermon, too, not least for his easy, charismatic way with "public speaking", to which he is clearly (quietly) virtuosically accustomed. Getting everyone to sing along with 'Eye of the Tiger' may have more than a touch of David Brent about it, but once Robinson simply starts to make contact with his congregation, his easy, laconic, anecdotal style is very easy to warm to and the whole talk is a pleasure. Anyway, the bit that particularly leapt out at me (it starts at about 25 minutes in to the video, if you want to skip straight there) was this:

Those who know me too well will already have guessed where this is going. Much though I take Robinson's point about the significance of expansive imagination, I'd have to say I'm basically on the side of the dog in this.

I don't know whether Robinson's source here is the teaching of the Buddha, or Bruce Lee, or direct personal experience with a set of babies and dogs under laboratory conditions, or what; but I do think it's important to look again at that Buddhist parable: in which it is not simply that we are encouraged, as Lee suggests to his hapless protégé, to look at the moon rather than missing the point (so to speak) by fixating on the finger; rather, we are told not to mistake the finger for the moon. Other renditions, particularly in Zen teaching, make this more explicit: the words of the teaching are not the point of the teaching, and understanding the teaching and understanding the words from which it is composed are not at all the same thing.

But the lack of expansive (or, we might say, extrapolatory) imagination in the dog, who does not in this instance comprehend the sign of the pointing finger, is not a mistake -- in fact, it is more or less the opposite of the mistake we are warned against. Whereas the baby interprets the pointing finger as a sign, a metaphor, the dog sees the finger as a finger, no more no less.

In a recent post I set up a binary -- slightly specious, like most binaries, but a workable distinction for thinking with -- opposing 'the window' and 'the wall' as two tendencies in poetic language-use. The window approach asks us to look through and beyond language, to treat it as transparent (or maybe, in poetry, translucent, or a little textured perhaps), a technology offering the empathetic spectator access to something beyond; the chicken, I guess, crossing the road in order to get to the other side. Others meanwhile ask us to look at the wall, to confront language as a material in itself, as a stuff in its own right, which does not refer to some remote picture, but presents pattern, texture, substance, colour, temperature. Most of these elements require us to get up close, to touch, to feel, to make contact. If we are looking for the window in the wall and cannot find it, we may initially think that there is nothing here to be seen, that we have come to a dead end with which no communication is possible. But actually, an intense experience of material presence, here and now and occurring wholly in reference to the range of creative means we have at our disposal for coming into relation with an object, is immediately and totally accessible to us.

I don't know that "the window and the wall" is quite sophisticated enough a model to have much use except as a provocation: but I think "the finger and the moon" does something similar, and to more nuanced effect. We shouldn't take it as read that the dog, or the student, who sees the finger and not the moon, has missed out on the chance of beauty.

For reasons I won't go into right now, I've been thinking a lot lately about haecceity, about how art can bring us into a relationship not only with metaphor, with the exercise of expansive or speculative imagination, but also with the 'thisness' of stuff: and this is not a constrained or stupefied reaction to a material encounter or event but rather an invitation to apprehend in the highest fidelity what it is that we meet in meeting the world. Nor is the secularism of this materialist task so militant that it can't yield its own reflective and even devotional pleasures -- think for example of Gerard Manley Hopkins riffing on Scotus in 'As kingfishers catch fire':

Each mortal thing does one thing and the same:
Deals out that being indoors each one dwells;
Selves—goes itself; myself it speaks and spells,
Crying Whát I do is me: for that I came.

(Yes, I'm afraid I too wonder whether the Speak & Spell was named after Hopkins's poem...)

In other words, even if Bruce Lee's advice -- "Don't think, feel!" -- were at all to be trusted, it's not as if "seeing the finger" is wholly cerebral in its promise (or perceiving the beauty of the moon, for that matter, a sub-rational act).

Moreover, even if we accept and value Robinson's fairly explicit premise that the expansive imagination is what separates humans from other animals, I am interested in the extension response that mines downwards rather than travelling outwards. In our example, I suppose this would be the dog that sees the finger and the sign, but does not produce out of this recognition any impulse to treat the sign as an instruction to be obeyed and (by the same extension) a catalyst, whose purpose is wholly instrumental and whose import vanishes on use, a message that will self-destruct. This dog sees the finger and understands at some level that the owner-operator of the finger is using rather than simply showing the finger, or is not merely showing the finger but is intentionally showing the finger. It is a finger that, as well as speaking and spelling itself, speaks of wanting. As Hopkins suggests, it cries with the intensity of the noun becoming a verb.

The baby that follows the finger but immediately dispenses with it except in respect of its utility value, and by extension (or expansion) sees the moon, and might or might not find the moon 'beautiful', is learning how to go to the (Hollywood) cinema, and how to read most mainstream poetry. The (admittedly slightly enhanced) dog that sees the finger, and, rather than interpreting its semiotic significance, instead appreciates and reflects on the fingerness of the finger, its connotation of gesturality at all, and the human desire out of which the technology of gesture arises, has invented theatre. (But of course in saying 'cinema' and 'theatre' here I am describing kinds or qualities of relationship that may have nothing to do with particular instances of the events that might take place in buildings bearing those names.)

And so, after the Cat Test, the Dog Test. The dog does not fail to see the performance matrix (in Michael Kirby's terms), and does not require that the matrix is eliminated or disavowed. All it asks in return is that it be allowed to establish its principal (and perhaps only) line of relation with actualities. The object is not dependent on its place in a system that requires it always to signal beyond itself to an ulterior meaning. The object suffices in itself. This allows the dog, too, to suffice, and to exist on the same plane as the object. The Dog Test, like the Cat Test, is an experiment in acceptance; it describes an uncapitalist space, wherein our first thought is of the thing itself, not of what it can be exchanged for.

So I really want to see those fingers.

No animals were harmed in the making of this post.
Posted by Chris Goode at 9:30 AM

Last line lol!
See also the Muckinese Battlehorn's
"Look! An impression of a heel!"
"Very good, Brown, but we've no time for your impressions now."

Labradors do follow pointed fingers to their pointed object, my uncle tells me. Best dog in the world, he says.