Today's the first day of a new devising project with Lucy Ellinson and Theron Schmidt, and you can imagine I'm as excited as all murgatroyd to be sitting on the edge of that particular brink. Thought I'd just take five minutes to mention a couple of things to you, though, before I immerse myself, for who o who knows when I'll re-emerge.

Firstly, I'm delighted to be one of the artists chosen to run a project in DIY8. DIY is an annual programme run by the indispensible Live Art Development Agency, in consort with numerous partners, in which training and development projects are conceived and run by artists for artists.

My project's called Queer Eye Enquiry: ways of not seeing straight, and it sort of emerged out of the conversations at the D&D satellite on queer theatre and performance that I hosted earlier in the year. Two things that came through very clearly were: a sense that the orthodoxies that queer has started to accumulate for itself have become really stultifying, especially (though not exclusively) for a younger generation of artists who, as a result, don't wish to identify themselves or their work as queer (a strategy with which I have some sympathy, though, as I said in the first half of this big post, I have some doubts about it too); and a desire among artists making queer work -- whether or not they'd call it that -- to be working in ways that are as much about queer process as about queer "product" (we could do with a better word for that half of the binary), without necessarily feeling confident that they know or clearly understand for themselves what a queer process would be or look like.

So, I've put together this fairly light-touch project, which you can be part of wherever you live, as it's being run in a decentred way, via mail and online channels -- except for the final session when all the participants will come together to say hello to each other in Birmingham (where we are the guests of Fierce, under whose aegis this particular DIY project is being run). More details here, including the application process (deadline is Friday 15th July). I do want to emphasize that the project isn't only open to artists who already identify as queer (or post-queer); one of the things I want to explore is the extent to which queer is a way of seeing, and a property of relationships, rather than something that inheres in individuals. That, really, is the entry point to a whole bunch of political and social ideas that I hope the project will be able to illuminate and investigate.

I want to mention also that the whole DIY line-up this year, as with previous years, is well worth investigating. Naturally I hope you'll want to do mine, but there's plenty else to enjoy, including projects run by the excellent Dan Belasco Rogers, the dauntingly legendary Scottee, and the intriguing jamie lewis hadley, whose work I don't know much about yet but sounds really exciting. A very strong political slant this year, a lot of stuff engaging with activism, psychogeography and sexual dissidence... Feel like I accidentally-on-purpose threw my hat into this particular ring at an especially interesting time.

Speaking of DIY: you might remember that I mentioned here recently a new poetry anthology that I've edited -- given that I wanted to read it, and it didn't exist, y'know, that was just how it had to be: a little bit of do-it-yourself. So, after thirteen months' work and thirty-nine nosebleeds, I'm thrilled to say that Better Than Language is now tremulously close to existing in the world -- official publication date is Monday 25th July. Here, look, it looks like this: 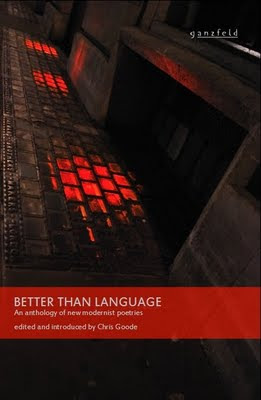 Or if you want to hang on and pick one up in person, there'll be launch events in London and Brighton -- see the sidebar on the Ganzfeld site for details. The London launch is Thursday 28th July at Stoke Newington International Airport -- pop it in your diary, there's a love.

Right, well, lots to do and performance artists coming round soon, so, I'm sorry, I'm going to have to scram. Apologies for the abrupt withdrawal, but you'll just have to finish yourself off. :)

loves xx
Posted by Chris Goode at 7:54 AM

How about "result", or even "results" for the second half of the binary, where the first half is process? It doesn't have the commercial connotations of 'product' and in the plural, somehow implies experimentation. the results of a process may not be the ones you set out to get, but they are what they are, and that's their validity.

Yep, I think that feels absolutely right. I like how it follows through the basic format of experimentation: hypothesis -> method -> results -> conclusion.

I like also the lack of fixity, in a paradoxically science-confounding way: results may be different every time the process is run...

I suppose my only hesitation about "results" is one that arises out of the problem with the idea of the binary in the first place -- the process always gives rise to "results" which are not part of what we normally think of as "product" -- and I really want to account for those results -- which means, I guess, we just have to keep challenging the binary -- which for me, at the moment, is so much about opening out process to audiences.

Lots to say on this I suppose, but won't get in to it now! xx

Hey, our course organiser only forwarded the link to the DIY 8 project today so while I've written up my application to you and sent it off as fast as I could I'm a little worried I've missed the deadline.

I'm very excited about the idea of this project and would really like to work with you on it.

Stretching the limits of the term 'queer' and exploring what it means in terms of identity and politics would be a really interesting thing to do.

You seem excited by the idea of the project too - if for some reason my application doesn't go through could you get in contact with me anyway, as I'd like to chat to you about these issues and how we can all move forward.