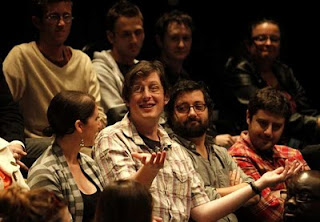 Wow. Thanks Chris. A great read. Almost, almost as good as being there with you. Lovely to read something from you. Something lovely and considered. Thank you. I am thinking of you all lots out there. Much love to all, a x

I saw The Author at the Traverse in Edinburgh during the festival, when I was performing there myself. One thing I actually thought about at the time was what would happen if you took the play to America (I don't think your tour dates had been released yet).

Playing on old stereotypes of nationality, the British are quite reserved and Americans less so. When faced with 'interactive' theatre, I think it can be said (in quite a general way) that we are less likely to rock the boat. But it's not all about the interjections the audience makes, or one audience member causing a scene (ha), but about the overall atmosphere in the theatre. I for one, was completely unsettled by the performance of The Author. I was hugely intrigued, having never seen theatre like it; I felt like I was going to faint in Tim's monologue; I found the lighting disturbing and disorientating - but despite all of these factors, I wouldn't have left the theatre. Whether that's because I'm a sheep or not is debatable.
I feel it's more to do with a desire to blend in, to not cause a fuss, to not obstruct anyone's view on your way out - call it my ingrained British sense of courtesy.

I hate to draw so obviously and crudely on cultural stereotypes, but whenever I've been to America, I've become quickly aware of how much warmer Americans are, how much smilier and easier to talk to. This would surely make theatre in the States a different experience, and would particularly have an effect on a play such as The Author, which, without traditional end-on seating in a proscenium theatre, sort of breaks down convention and establishes a dialogue with (and within) the audience. It doesn't surprise me that American audiences relish this dialogue. I can imagine a few American friends of mine quite happily settling down to a stonking chat in a theatre when addressed by a man who is clearly an actor, whereas I would feel very conscious (and did feel very conscious, when I saw the production) of not upsetting the atmosphere that the actors were trying to create. I wanted to help the actors along, answer when necessary, but leave a staring pause when it seemed that an answer wouldn't necessarily be useful to the progress of the play. I found myself thinking, constantly, about what was being asked of me.

Perhaps I'm being too crude here in my analysis of different audiences. I want to ask: what's so exhausting about it? Having to accept graciously the audience's response to your initiated dialogue, and then feeling obligated to steer the direction of that dialogue? Do you feel guilty that you can't let this dialogue flow, and move somewhere of its own accord? The Author purports to give its audience a voice, or more of a voice - where do the boundaries begin and end? And are you having to shift those boundaries for different cultural audiences?

I'm not sure these questions are quite adequate for what I'm trying to say.

Is there a constant rehearsal process for the play, or once you're touring have you ceased to work on it? Are you working with the play again, in order to adapt it to this new 'uphill battle' you're facing? (And will you be returning to the Festival Fringe this summer?!)

I'm not sure I've articulated myself well, or even interestingly. Basically, I'd like to say that I do really enjoy your blog; it's beautifully written and poses some really thought-provoking ideas. I'm an English student, and am heavily involved in theatre in as many ways as I can be, so this blog sort of hits the nail on the head in terms of stimulating and engaging reading. Thanks.

I was the guy sitting to your left on last Saturday's matinee. I was completely engrossed in the performance, and have been thinking about it ever since.

Kudos to you and your fellow actors for giving this often jaded theater-goer something completely fresh and different.