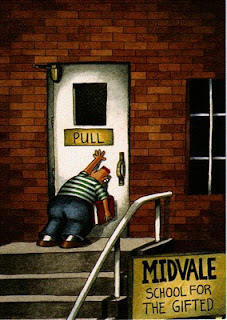 I find this one of the most moving, heartening, energising texts that I've ever encountered in that arousing borderzone where art and politics most explicitly meet. This is helpfulness at its most expansive, and there's no doubt that theatre that did this would be helpful too. What's more, of course, theatre can do it much more easily: there's no such list to pass on: the only elements required are free and everywhere and number just two: an empty space (copyright P. Brook); and enough intelligence and curiosity to know that, contra Brook, no space is ever empty -- from which follows everything else. If we want consequential theatre, if we want theatre that helps, if we want to change our "ways of expression", we could hardly do better than begin by noticing how much easier we find it to tell others that all they need is an empty space and the desire to create action within it, than we do to pay attention sometimes to our own encouraging advice.
Posted by Chris Goode at 8:25 PM

I don't really have anything to say at this stage but seeing an empty comments section I just wanted to fill it with an almighty yes. And a longing to keep pace as we all keep jogging in the thrilling, hopeful direction we've set out on.

Let's keep helping each other, taking the lead when we need to and hanging on someone else's shoulder when we're exhausted (by the thinking, by the living we're trying to squeeze around it, by everything).

Aaahhh, yes! "Skank Bloc Bologna". I remember buying it at Our Price in Wimbledon Broadway the week it came out. Still have it; it's still stunning. The combination of its enthusiasm for autonomist action and the oblique acuity of its analysis - not to mention the glorious choon - make ALL of it still relevant, not just the (splendidly inspiriting) cover.

Here's a snatch of the words:

Where's the stuff about Pinter pauses?
Only Joking. I'd just as rather have this. And just want to say a thanks and yes from me too. A great post. Good to be with you.
a

I find this one of the most moving, heartening, energising texts that I've ever encountered in that arousing borderzone where art and politics most explicitly meet.nice post thanku for sharing.