I mentioned a few months ago how much I liked the programme for David Hare's The Power of Yes, which included a great visualization of the relative scale of different billion-dollar-sized statistics -- the cost of the banking crisis versus the cost of the Iraq war, and so on. I was really excited by the immediacy of this rendering of otherwise abstracted and inconceivable amounts of money into a series of legible shocks.
That Billion Dollar-O-Gram is just one of the visualizations that David McCandless (of Information is Beautiful) shows his audience in this presentation to TEDGlobal 2010, the conference devoted to 'Ideas Worth Spreading'. I always like any kind of live event that includes people applauding a graph, and though not everything that McCandless says here strikes me as unproblematic, there's lots in these 20 minutes to please the eye and tickle the brain.
Posted by Chris Goode at 12:01 AM No comments:

Stella Duffy on The Author

[The old-school blog equivalent of a re-Tweet here...]
As you'd expect, a stellar piece of thinking, feeling and writing -- all at the same time:
http://stelladuffy.wordpress.com/2010/08/22/the-authoredinburgh/
Posted by Chris Goode at 12:54 AM 3 comments:

Written on the body

Jonny Liron photographed by the amazing Tess Hurrell.
At the end of a day of R&D at the Jerwood Space a few weeks ago, Jonny got us all to write words on his body for a presentation he was about to go off and do. Afterwards, his neighbour Tess documented this beautifully ephemeral text.
Thanks to Tess for letting me post a few of the series here, and to Jonny for sending them on, and for wanting to be written on in the first place. 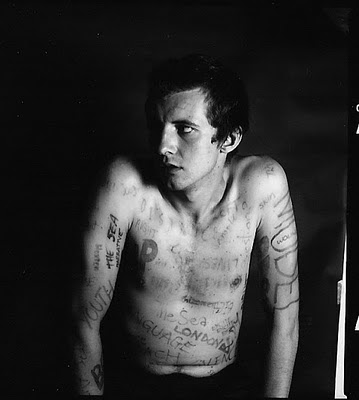 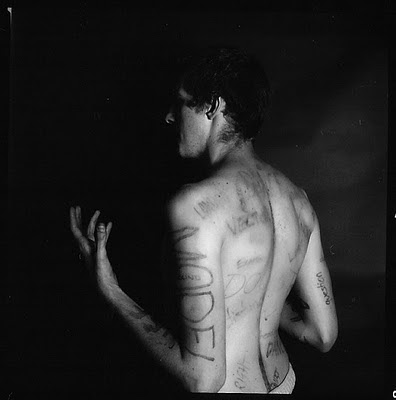 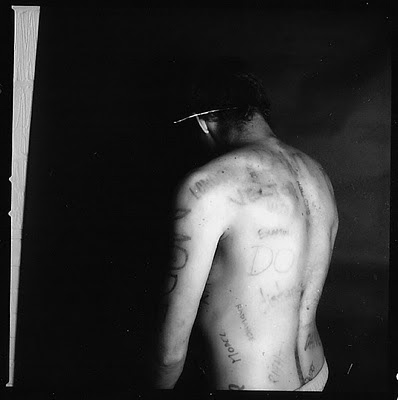 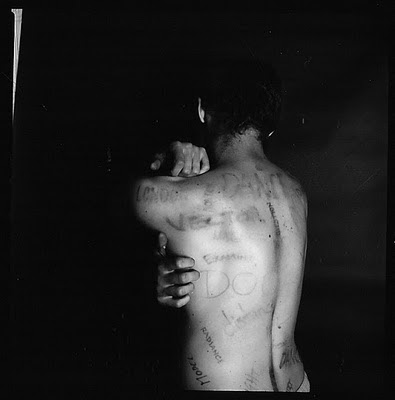 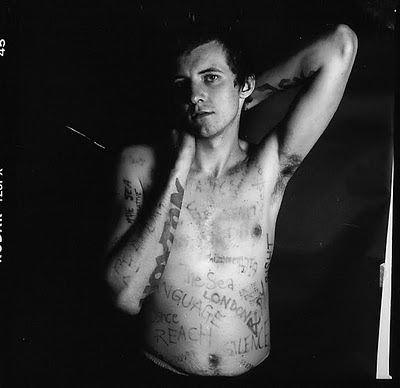 All images (c) Tess Hurrell
Posted by Chris Goode at 12:52 AM No comments:

[W]hile this is clearly a piece of theatre, the blood is real. Played out in a wire cage, the actor playing Hussein (Steve Lambert, who also directs) has his head repeatedly held under water; he is pushed and kicked and again and again; he is thrown against the wire. As the performance continues, his back becomes red and raw. Blood trickles from a cut on his arm. For the audience, this presents a tricky situation. Walk away and you are effectively put in the position where you are walking away from all those who are tortured by governments around the world. If you stay, are you being complicit in what is happening on stage, or bearing witness?