...is where this afternoon finds me. Room 202 of Holiday Inn, Northampton. (It's like Room 101 but twice as bad.) ...Actually, it's fine. I love hotels like this. It's the best part of touring.
Henry & Elizabeth seems to have got off to a good start, though annoyingly, as (seemingly) ever, the one slightly misfiring performance we've done since we got here was press night, where we struggled in a pretty minimalist apartment with an open plan kitchen / living room and a three-storey journey to the car park outside: all of which, while not ideal, we can handle, even all at once: but there's a difference between handling and actually inhabiting, and we never really got close to being able to tune the space to our story. Press nights are always tricky anyway, if you're trying to create any kind of intimacy or emotional pressure. A couple of slightly underwhelmed reviews have emerged so far -- in The Times and at Reviewsgate -- neither of which I can quibble with. It's irritating though given that the response from regular audiences so far has been a great deal warmer and more excited. But, so it goes.
Something that strikes me about Henry & Elizabeth which interests me very much but might not be so appealing to some critics and other stakeholders, I suspect, is that compared to some of my earlier home pieces, The Tempest above all but also Homemade and even We Must Perform A Quirkafleeg! to some degree, is that its performance matrix is very delicate, as light and fragile as spun sugar. The Tempest in particular was all about a kind of transformative, concertedly metaphoric experience: the cupboard under your stairs becomes Caliban's lair; it's Ferdinand's enforced labour at Propsero's bidding that leads him to do your washing up. In H&E, the cupboard under your stairs is where Henry has a scene about looking for something in the pocket of his coat; Elizabeth does your washing up because there's a scene in which Elizabeth is doing the washing up. So the way in which your experience of your home is inflected by our presence, both during and in the aftermath of the performance, is rather subtler and less seductive; less rapturous, but more likely to flicker. It's funny how this pushes what is actually rather a conventional and naturalistic play, albeit one told half through direct storytelling, into the realms of non-matrixed (or barely matrixed) performance, normally the domain of live art. But I doubt it will be seen like this: it's a theoretical observation which is not high in the mix of the experience itself. ...Well, time will tell what the Guardian and the Sunday Times made of it.
Speaking of The Tempest, I've just uncovered, in a cobwebby region of my hard drive, a bunch of old photos from a decade or more ago, which I thought I might share, in lieu of having anything interesting to say. I was looking for much more current publicity photos, which it seems are nowhere to be found, but these are a diverting if useless consolation prize. 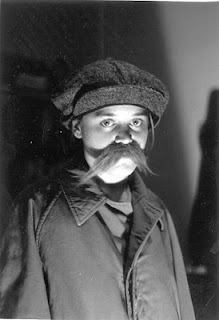 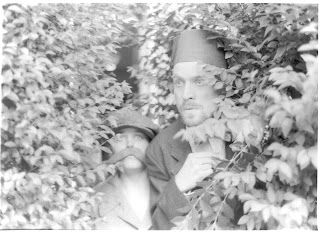 Gemma Brockis and Tom Lyall (both currently viewable in Shunt's splendid Money) as Stephano and Trinculo in Signal to Noise's The Tempest, in the summer of 2000.
Photographs by Finlay Robertson. 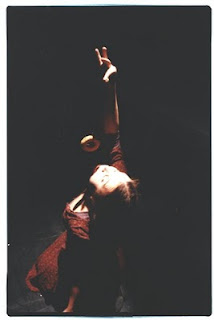 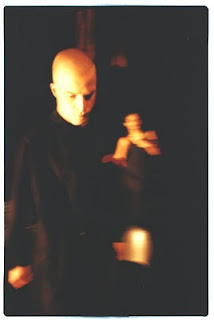 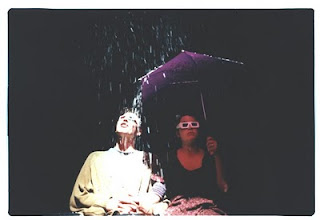 Gemma again; Tom again, with Rajni Shah in background; Jeremy Hardingham with Gemma experiencing a sudden flurry of snow at the cinema.
The Consolations, the very first Signal to Noise show, at The Place, London, autumn 1999.
Photographs by Sarah V. York. 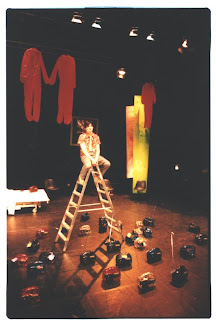 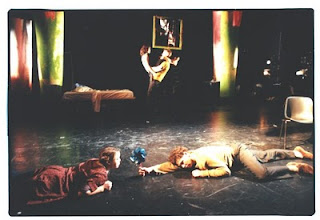 Theron U. Schmidt as bisexual rock star Cody Wyoming, atop a ladder at the end of part one of The Consolations. The amassed detuned radios proved somewhat controversial among more politically sensitized colleagues, for reasons that I couldn't at that point comprehend; I do, now, but I still think the efficaciousness of the scene wins out for me.
And another key scene: in the foreground, Gemma blows the (pretending to be) unconscious Jeremy's pinwheel while Rajni and Stefan Warhaftig dance (i.e. fuck) in the background. 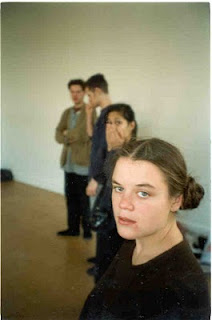 And an all-time favourite rehearsal snapshot: still frantically making The Consolations, about four days before the tech. Jeremy, Stefan, Rajni and Gemma in one of the littler rooms at the Jerwood Space.
I can't remember who took this one. 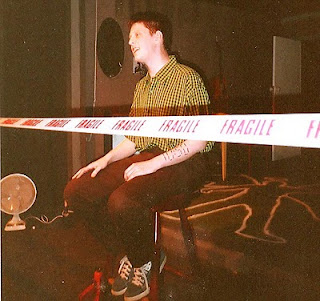 Even further back: an action shot from my first (almost) solo show, Puckerlips, at the Gate in early 1998 -- this picture was taken by an automatic camera on a timer, placed on-stage by unspeaking fellow-performer Theron Schmidt; there was one shot every night, but few of them were as serendipitously composed as this. At this point I'm singing a song called "Over the Road", about joyriding angels and similar sixth-form bobbins. Right now I'm reminded of the night the eyebrow pencil which Theron used to write the time on my forearm broke, and he ended up sort of scratching the numerals into my skin. Thus, the invention of emo, or something.
And secondly, with Theron, a promotional shot for Puckerlips in Edinburgh the previous summer, taken on King St in Cambridge, where we found this bit of smashed-up reflective something-or-other on the pavement.
Photo by Jeff Cain. (Hi Jeff, if you ever see this!) 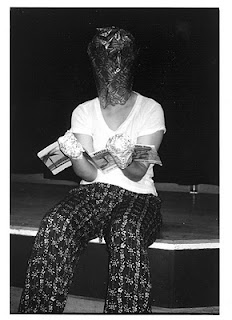 And on the cusp of prehistory: Emma Williams in River Phoenix on the Sidewalk, the last show I directed as an undergraduate, May 1995.
Photo by me, I think. 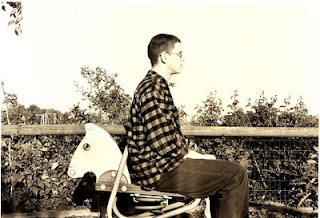 And a picture of me in a playground in Cambridge, a publicity shot for my 1994 May Week show How To Cut Your Family's Hair. This photo, taken by one of my cohorts in the show, Dan Roberts and Erica Rogers (sorry, can't remember which), is probably the photograph of myself that I dislike least in all the world: I used it as a publicity shot for years, but I really can't get away with it any more. 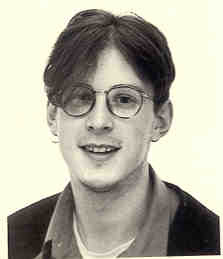 And finally... (a bit off topic) -- the Non-Controlling Proto-Thompson himself, as featured in the October 1998 employee list of Leo Burnett Ltd., where my job title was 'Idea Stimulator'. A fairly epic depressive breakdown and the unfairly epic queer physical theatre wig-out The Consolations followed within about a year, in that order. I don't look like this any more. I don't honestly believe I ever did: though I do still have, and occasionally wear, that shirt, which has survived longer than any of the cells in my body as pictured.
Shall we leave it at that? It's nearly time for Eggheads.
Posted by Chris Goode at 4:29 PM

I love all these. And am really gad to see my shots of Gemma and Tom have not been lost to the dustbins of history (that photo of Gemma is one of my best portraits EVER). As for the reviews, Timothy Ramsden sounds like a bit of a know-it-all smug merchant IMHO. His review would probably get him a good grade at GCSE anyhows - and well done him for solving the puzzle. And thinking it's a bit like JB Priestly. FFS.

Dear Mr Ideas Stimulator, a lovely post. Thanks. So it was you that invented emo... Hope that it all continues to go well, and apologies for my referring to the show as Henry and June previously. All yours, a x

Andy -- was talking to the H&E actors tonight about your work and it turns out one of them knows you -- Philip Bosworth, aka Boz, with whom you were at Hull some time in the last century, & who wishes to be remembered to you...

In the smallest of all possible worlds, nothing is impossible!

Ah, yes, Boz mentioned knowing Bea at breakfast the other day. And he certainly knows Sebastien because they both did that week on The Witch of Edmonton with me.

But how does Boz know when you're going on holiday?