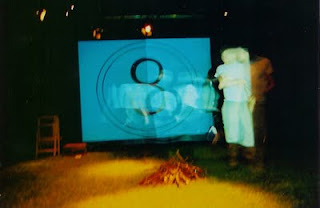 Past the Line, Between the Land (CPT, 2003)
dir. CG, design / photo Emily Orley
It was CPT's 15th Birthday party tonight. I had another commitment, unfortunately, which kept me from going. But non-attendees were encouraged to send messages and share memories, and I sent a little piece which I thought I'd also post here, as, say what you like -- I don't necessarily expect everyone to feel as affectionately about the place as I do, but -- it's quite an achievement for the organization to have lasted this long, and it deserves more recognition. There are a number of venues (let's not say who, you know who) a little upscale/downstream from CPT who like to take credit for having discovered this or that artist or group, when very often they've actually seen them at CPT or heard about work they've done there. The work CPT does in supporting artists who truly are at the very beginning of their careers is hugely important and undersung, as is the distinct care with which more established artists are encouraged and nurtured. It continues to be a mystery to me as to why it's so hard to get people to actually go and see stuff there, given that it's within two minutes of two different tube stations and they now sell flapjacks... When I went back recently for a couple of LEAN UPSTREAM events, the venue felt better than ever. Matt Ball's done a great job, I think.
Anyway, this is what I emailed them, in lieu of sending a cardboard cut-out of myself looking winsome. (Because everybody's got one of those by now, right?)
* * *
Thinking of my time at CPT, one memory always comes first to mind…
Monday 2nd June 2003. The day of David Chapman’s get-in. I had seen David’s wonderful one-person show, The Bisexual Alphabet, in Edinburgh the previous August, and for the first (and I think only) time during my tenure, I had arranged to bring him over from the States to do a three week run at CPT. It was quite a commitment on both sides. David, one of the most charming and disarming people you could ever hope to meet, arrived full of excitement on that Monday morning, not having even seen a picture of the theatre he was about to spend the next few weeks performing in. Proud as I always was of the space, and knowing how lovely it was to show solo work in, I eagerly opened the door to the theatre and showed David inside.
It was raining in the theatre. Seriously. Inside the theatre. And not just a little drizzle, either, but a full-blown downpour. Had it been a sequence in a Robert Lepage show, everyone would have been marvellously impressed. As it was, there had been a flood upstairs, and a perilous amount of water was coming through the theatre ceiling. I’ll never forget the sight of it. And I’ll never forget the look on David’s face, either.
That’s the memory that always comes first, often accompanied by a little shudder.
And then I remember how that story ends. How, fortunately, there just happened to be quite a few people in the building that morning: Lynne in the office, Wishbone in the basement… Several other CPT folks at the end of the phone, who all mobilised without a moment’s hesitation. It was a pretty sorry (and soggy) day, but disaster was averted, exciting industrial drying machines were hired, and consoling cups of tea were made. Even David got into the spirit of it, and missed just one performance before opening his show on the Wednesday evening — in the foyer…
I was back performing at CPT only a few weeks ago and I still love it as a space, and as a venue. But first and foremost, what I remember of CPT most vividly is that it’s an idea shared between people: an ever-larger family of amazingly creative and dedicated people. And the statistic-defying, trend-busting longevity of CPT is an awesome testament to the ingenuity, generosity and sheer bloodymindedness of that family of people: from the gang of idealistic young originators back in ‘94, to its present creative team and the artists they’re nurturing now; from the box office staff, the longest-serving of whom have seen more of CPT’s story from the frontlines than anyone else, to absent friends like Sheri [Bramwell] and Rebecca [Lublinski] who will always be characters in that frankly unbelievable story, and so always feel close by.
To work with so many of those people for the three years I was at the helm of CPT was the greatest privilege of my professional career to date. They are the kind of people you want to be standing next to when it’s raining inside. May the idea that we all hold in common continue to flourish and grow, and confound expectations, and drive us all a little nuts—but drive us on, too. This milestone of fifteen years is an astounding achievement: but everybody knows this is a story that’s only just begun…
Happy birthday!
Posted by Chris Goode at 1:51 AM