A brief hiatus in which to admire...

...the godlike genius of Malcolm Phillips, who became the much-adored photographer-in-residence for the LEAN UPSTREAM season. Now that the season's over, there's no better way to mark its having happened in these pages than to show you a small selection of Malcolm's documentary images; there are more over at his Flickr photostream, alongside lots of other quite extraordinary sets and singletons. Not only is he doing an incredibly valuable job in documenting much that's happening on the poetry scene at present, but he's wildly good at buildings and (what sometimes get called) non-spaces too. Very unusual for one photographer to be as good with architecture as they are with people, I think (though I'm sure you can think of exceptions), but Malcs has a remarkable gift for bouncing off of each other an astute and imaginative analytical eye and a quick and generous wit -- qualities which have also made him a hugely valuable poetry critic, and a more than decent poet himself. (Though we'd like to see more of this last, please.) Fascinating to see how a compositional intelligence expresses itself in supposedly different modes -- the visual and the literary -- to quite similar effect. At any rate, in showing these few examples from his brilliantly sensitive and wonderfully unobtrusive work near me over the past few weeks, I can do no more than express my deepest gratitude to Malcolm for the kindness of his attention and the scrupulousness of his company. 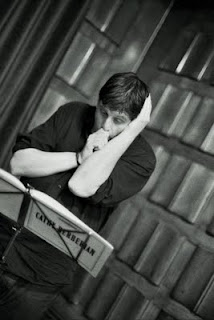 A warm-up performance of Stripsody for promotional purposes 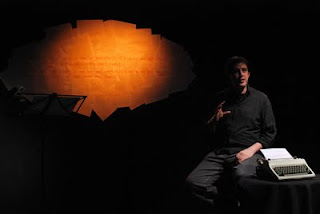 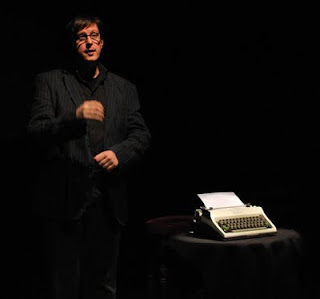 As Robert Wilson in Yeah Boom! 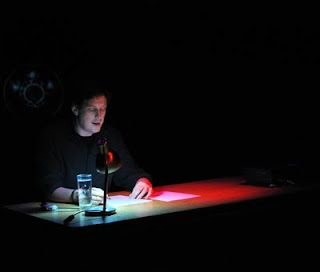 The Net Work of Howard Betel at CPT 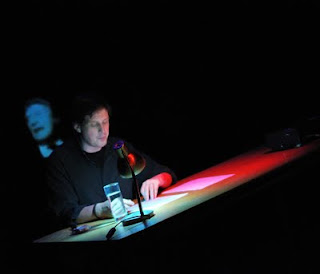 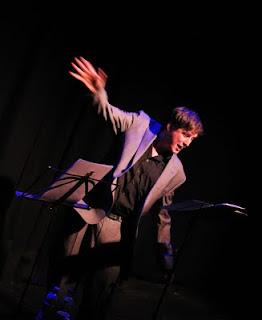 Stripsody, for real this time, at Toynbee Studios 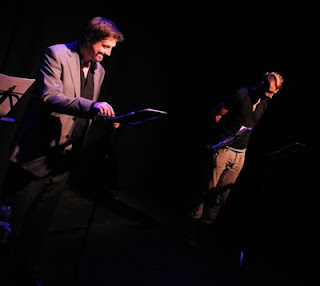 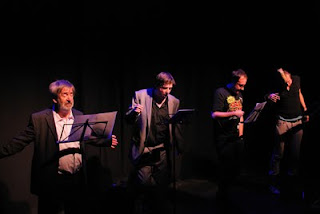 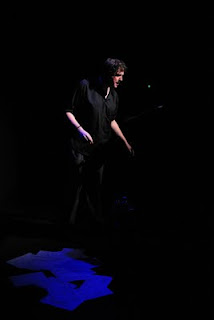 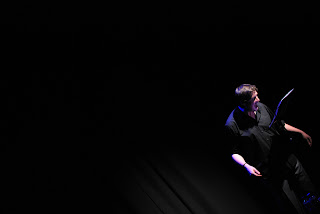 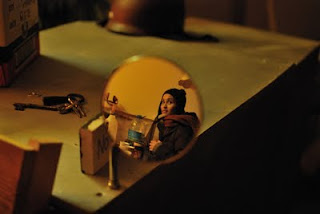 History of Airports book launch at STK: Rajni Shah, a picture of serendipity 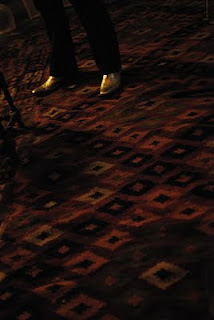 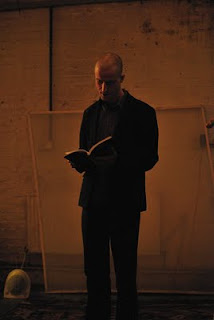 Everything but the shoes of Tom Lyall 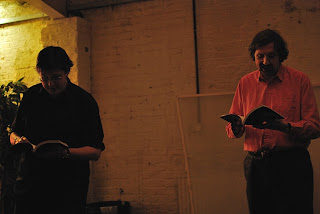 CG as own granny; Harry Gilonis 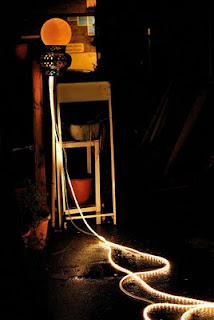 STK landing strip
LEAN UPSTREAM is now over -- in fact already almost a week has gone by since the last of the events. I had good fun at the Artsadmin Weekender workshop: some really terrific people in the room, and exciting to have a group that was so diverse in its interests and various in its voices, and yet so ready to meet each other and work together; particularly useful to have people in the room who were quite newly arriving at performance from a visual arts background. Nice to see a couple of old Devoted & Disgruntled acquaintances too, with next January's event now booking. (Hope to see you all there, Thompsonistas. This year's was amazingly enjoyable and productive, and I can't wait for the next one.)
And then last Sunday's book launch was a great night, thanks principally to the miraculously large crowd who turned out on a damp and freezing evening, and to Greg McLaren at Stoke Newington International Airport, the warmth of whose hospitality was very nearly enough to stave off the chills. It was a long night -- so many of my old cohorts kindly made themselves available to read (all of them pretty brilliantly, I thought) that we got through pretty much half the book! But it felt, quite surprisingly -- HOA being a self-published enterprise full of shreds and patches -- as if something substantial had happened, and not only that but that it was worth celebrating. So I was very touched and very glad of all the circumstances that gradually shunted the launch event down the month's schedule so that it ended up being the last thing in the season. It couldn't have finished more delightfully. Thanks so much to everyone who came -- those who read, those who listened, and (with special brownie points) those who bought the book. (Check the sidebar if you want to get your copy. They're running out fast and I'm not too certain that I'll get any more done, unless the demand is obviously there. -- Btw, if you're reading this having ordered a copy by Paypal, I promise it's coming -- they should go in the mail early this week.)
This last week has been spent in an R&D workshop for Headlong -- I don't think I'll say any more about the project now, except that the week was, I thought, really exciting and encouraging: particularly the final afternoon, on which everything came together in a basically improvised script-in-hand production of the piece in toto, running three hours without a break, in which the acting company's creativity and acuity didn't falter once. I sort of wish it had had an audience: aspects of it were, I thought, exemplary -- the kind of thing one struggles to describe when asked about one's "vision". We were all pretty whacked by the end -- nice to have that feeling of hard work having added up to an extraordinary event, and a well-earned weekend waiting for us. I can't think of a room I've enjoyed being in more; thanks, should they see this, to Ben Power and Wendy Hubbard, and to all the actors, who without exception were beautiful to work with, and created together a really rare ambience. Remarkable stuff.
The rest of the year seems to have little in it beyond heavy blog obligations -- not least the Furtive 50. The 259 long-listed albums that I mentioned in my post of September 25th have now more than doubled in number to 559, what with the end of year effort to hoover up all the significant things I may have missed: and so the task ahead is more daunting than ever. I'm not sure that acquiring 559 new albums in a year is entirely what people are for -- but, hey: inhale, inhale, I'm the victim. I'm just worried that this plus the Advent Calendar could see me taken into residential care by twelfth night.
Next major post here -- as I know I've said before -- will be my interview with Tim Crouch and a smith. (I'm kicking myself for missing Tim in conversation with Karl James at Siobhan Davies last night -- anybody go?) And after that, the 'request' post I trailed a few weeks ago. I've chosen my subject now from the handful of submissions so we can consider that little interactive flurry now closed, ta v much.
Right. Best hit eject: got to be back at my post at 7am for you-know-what... xx
Posted by Chris Goode at 2:44 AM