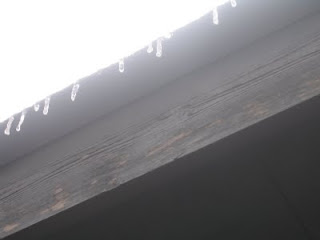 Mindful as ever that a fair number of regular Thompson's visitors have -- as an old boyfriend once said of me -- only "a distant relationship with fun", here at last is an advent post with a low jollity quotient. What started as a simple recession-themed day (of course!) has ended up becoming an attractive crunch-busting BOGOF deal by incorporating what I had supposed would be a separate day on a sort of "bleak midwinter" tip. They seem to go together quite appositely, so, voila. No no, don't thank me.
I wonder what you need to know about all this. Well, let me put my Chrisipedia bobblehat on and extrude a few contexual notes. Aulis Sallinen is a contemporary Finnish composer -- you may have heard the Kronos Quartet do his stuff, including this piece, though this isn't their version; as a composition it's of little or no interest but I like the feel of it. Rosalie Sorrels is a wonderful folksinger, now well into her 70s, and admirably determined to keep her gaze fixed on the bigger picture as well as on the details of working people's lives; she was a friend both of Utah Phillips and of a bunch of significant poets such as Ed Dorn and Robert Creeley, and, as such, an important counter in the 'six degrees of separation' games you might play from inside your Boxing Day catatonia. John Baker, one of the undersung geniuses of the BBC Radiophonic Workshop, made his "Christmas Commercial", featuring cash registers playing "O Come All Ye Faithful", some time in the mid/late 60s, out of tape and scissors. About the Odd Band I'm clueless; all my frantic Googling came to naught -- anybody out there know anything about them? And finally come two almost-equally Odd musicians: John Fahey, whose version of "In the Bleak Mid-Winter" is one of my favourite recordings of his and also one of my favourite recordings of the Holst version of that carol -- you may remember I used it, much ill-treated, as the base for my sexy little Christmas movie in 2007; and Klaus Nomi, the alarming but loveable German artiste who, to my mind, never produced anything more interesting than this remarkable rendition of the great aria from Purcell's King Arthur. (Michael Nyman later exploited the same piece for his soundtrack to The Cook, The Thief, His Wife and Her Lover; a straighter rendition in a non-classical setting can be found on Sting's slightly eccentric but not actually unpleasant current album If On A Winter's Night.)
If you get anything better in your stocking this Christmas than a segue from John Fahey to Klaus Nomi, I'd like to hear about it.
Cheerier fare tomorrow, I promise.
Track listing:
1 Aulis Sallinen: Vintern var Hard, op.20
2 Rosalie Sorrels: Winter Song
3 Onion Radio News: Broke Dad Makes His Son A Playstation 2
4 John Baker: Christmas Commercial
5 The Odd Band: Christmas on the Dole
6 John Fahey: In the Bleak Mid-Winter
7 Klaus Nomi: The Cold Song
Posted by Chris Goode at 7:00 AM