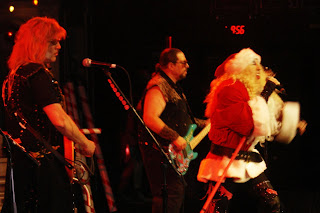 Let's face it, my little Thompson's elves. Christmas and the concept of subtlety go together like Renee and Renato: i.e. the one after the "and" is dead. Welcome then, every one, as we turn the Advent Calendar up to 11 for a heavy metal special. You'll thank me for it one day.
We begin with hateful, hateful, o so hateful Waco-resident far-right hatepig Ted Nugent going twiddly-diddly-dee with his big silly guitar. You should spend this time trying not to think about the poor drooling racist homophobic cretin Nugent decking his halls with guns and ammo. He is a terrible terrible man, a truly appalling scumbag whom I strongly suspect will become President in 2012: but he certainly knows his way around a big silly guitar.
Metallica next turn in a splendid version of "Carol of the Bells": more of a US than a British staple, this tune, and thus more likely to have reached local ears through its pivotal and slightly scary employment in an episode of The West Wing, and/or its moonlighting life as slacker protest song "Ding! Fries Are Done". Nice to see Metallica restoring its original majesty. WOULD YOU LIKE AN APPLE PIE WITH THAT? etc.
AC/DC's "Mistress for Christmas" seems to have no reason to exist other than the half-rhyme of its title, and yet out of that modest beginning they manage to build something truly gross, like a Brunel suspension bridge created from turkey giblets. It kind of brings a tear to the eye. Worth sticking with for an almost glossolaliac coda from dependably ludicrous vocalist Brian Johnson, who sounds, as ever, as if he's been gargling with reindeer.
But, darlings, we've saved the very best for last, with Twisted Sister's ecstatic reworking of "The 12 Days of Christmas". In its way, it's easily as compelling and arguably as credible as the story of the nativity itself. One can't help feeling that, had Twisted Sister appeared to certain poor shepherds who were abiding in the fields, rather than the Angel of the Lord, we might not be in such dreary peril now. Treat this song not as a novelty, but as a challenge to your reluctance to believe, children. Treat it as an inspirational challenge to your insipid and pusillanimous lifestyle. Sing out! All together now! "Five skull earrings!" It literally doesn't get any better than this.
Scoff if you must, but let us never forget, my dears, that the first wise man brought metal.
Something a bit calmer and chillier tomorrow, so warm yourself to these egregious excesses while you can.
Track listing:
1 Ted Nugent: Deck the Halls
2 Metallica: Carol of the Bells
3 AC/DC: Mistress for Christmas
4 Twisted Sister: Heavy Metal Christmas (12 Days of Christmas)
Posted by Chris Goode at 7:00 AM

better than any tinfoil sheathed chocolate reindeer from a calender