December 21st: Soft Rock-in' Around or Near the Christmas Tree 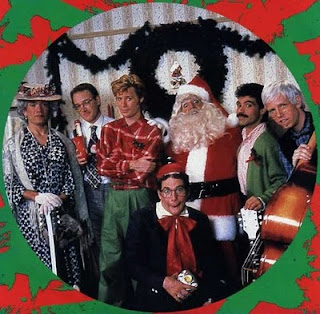 Yup, it's adult-oriented rock day, Advent fans. You could spend every day between now and Baby J-Chro's Birthday Morn paxotastically stuffing your ears with agèd Stilton and still not out-cheese these aural doozies. Also, be warned, tests have consistently shown that these songs can penetrate up to three feet of blue cheese, so don't think cramming your lug'oles with Blacksticks Blue is going to insulate you from their awesomely untorrid effects.
Actually, I may as well pre-emptively cry Uncle! as nothing I can possibly say about any of these songs will make the slightest dent in them, nor make them funnier than they already are. I suppose one might ask whether there's ever been a less rock'n'roll version of "Jingle Bell Rock" than Messrs Hall and Oates turn in -- and I'm including in that not only fully-fledged pop acts but also novelty musical tea-towels and chickens with whooping cough.
Ha ha ha, funny man. And then of course, after two glasses of cooking sherry and a quick, possibly even accidental, fumble under the mistletoe, I will obviously break down and confess that I think Jon "Yes" ("Really?" "Yes!") Anderson's recording of "O Holy Night" is the most beautiful thing ever. Ever. See. Hmmm. That's how they get ya. That's how, in the end, REO Speedwagon's temerity in covering "Happy Xmas (War Is Over)" goes unpunished. All because of cooking sherry. Curse you, cooking sherry!
See you tomorrow for some rather more incontrovertibly classic cuts as we enter the home straight -- and not a moment too soon. Love you bye.
Track listing:
1 Chicago: The Christmas Song
2 Hall & Oates: Jingle Bell Rock
3 Jon Anderson: O Holy Night
4 REO Speedwagon: Happy Xmas (War is Over)
Posted by Chris Goode at 7:00 AM

When I listen to Jon Anderson I feel like Thomas.

Like Christ is steadily and carefully putting my finger into his body.

The crude smell of his open wound overwhelming me,

only to be reminded by the way he is looking at me, the specific quality of his attention on me, that I must be attentive, and work with him, to feel how real this is.

Dear Chris
sadly i will be going off-piste and so will have to catch up on the remaining advent offerings post-match. thanks for all so far, have yourself a lovely christmastime and mind that sherry. love nikki x