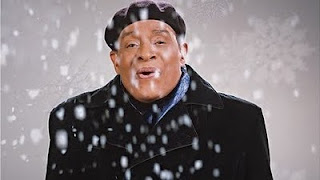 Hey, cool Christmas cats. If you're anything like me, actually, your cool may have tipped over into perishing cold these last couple of days... Well, not to worry: hang on to your sang froid, and come warm yourselves by these log-effect tracks from some modern masters of mainstream jazz.
Actually, calling Maynard Ferguson a modern master might be pushing it a bit, but if you can't let your belt out a notch or two at Christmas and enjoy a big fat pile of brass vulgarity, when can you? For those who may not recognize the name, Ferguson died a couple of years ago, but had a long career as a bandleader in the crossover jazz/pop vein, and a trumpeter who was best known for being able to hit stratospherically high notes with pin-sharp accuracy. By the time he formed the Big Bop Nouveau ensemble in the late 80s he was past his best but this sort-of-wonderfully tasteless medley gives a pretty reasonable survey of what remained of his signature schtick.
Oscar Peterson, who also died not that long ago, was a boyhood hero of mine, and sort of remains so: I'm not by any means a hairshirt jazz purist and the great Oscar always had (for me) exactly the right balance of delicate poise and virtuosic balls-out razzle-dazzle. This reading of 'White Christmas' is, in fact, hugely restrained, as his ballads usually were, and, well, if you hear a gurgling sound, it's me, on the floor, loving every minute of this ineffably classy bit of schmaltz. Ah, he was a great great artist. I wish I hadn't said that about his balls now.
Taking a momentary break from sorting the populace into those who walk by night and those who fly by day, pop-jazz crooner Al Jarreau, smooth as a half-pint of velveteen nog, turns in pretty much the only scat-inflected version of 'O Come All Ye Faithful' that I think I've ever heard. You have to admire his chutzpah. Don't you? Just a little bit? ...I know I always fulminate against the whole category of 'guilty pleasures' -- if a thing is pleasurable, why feel guilty about it? -- but I have to admit Al's a little on the guilty side for me...
Same, to an extent, with Dave Brubeck, who, again, I idolised as a piano-playing jazz-buff teenager; these days, I have the same misgivings as many critics, who find Brubeck a mite heavy-handed and perhaps not technically as acute as some other front-rank players. On the other hand, he always brings an enjoyable art-school harmonic sensibility to standards as much as to his own compositions. On this solo rendering of 'Santa Claus is Coming to Town' he seems to cover everyone from Tatum to Monk (actually steering the tune into 'Blue Monk' once or twice) but the voicings are unmistakably his own, and the whole thing ends up, I think, pretty delightful.
And we end with a version of the carol 'Personent Hodie' from a fairly recent album by Wayne Shorter. Shorter's a bona fide legend, though his work of the last twenty years ago tends to excite me less than the stuff he did earlier in his career; also I generally prefer him on tenor to soprano, as he is here. Nonetheless I think this is a really accomplished reading of a simple but fecund text: I love the way he allows it implicitly to unfold and extend itself harmonically, supported by a pretty excellent band, including the hugely talented bassist John Patitucci.
Ha!, get me, coming over all muso. That's not what these Advent Calendar mixes have tended to lend themselves to, I suppose. Anyway. I'm over it. Enjoy what you can, ignore what you can't, and I'll be back tomorrow with an assortment that, from a musicological point of view, will not so much be troubling the scorer. Till then, hep ones... xx
Track listing:
1 Maynard Ferguson & Big Bop Nouveau: Christmas Medley
2 Oscar Peterson: White Christmas
3 Al Jarreau: O Come All Ye Faithful
4 Dave Brubeck: Santa Claus Is Coming To Town
5 Wayne Shorter: 12th Century Carol
Posted by Chris Goode at 7:00 AM

Great story you got here. I'd like to read more about that matter. Thnx for posting that information.
Sexy Lady
London escort

Thanks for stopping by. I'm so glad you liked the post.

Let me tell you, the news that there's a Sexy Lady out there who has a genuine interest in Dave Brubeck is going to be a real comfort to all the Not Terribly Sexy Gentlemen out there who were beginning to conclude that such a person might not exist.

I think you're going to have a very busy Christmas.