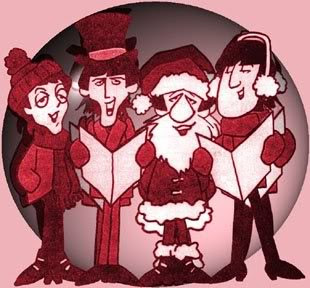 Just one little curio today, but as rich and disorienting an eight-minute trip as you could wish for.
Every year from 1963 onwards, The Beatles recorded a special Christmas flexi-disc which was sent to every member of their fan club. The seven discs add up to a remarkably clear series of snapshots of how the band developed and, ultimately, fell apart. Early editions present a fairly coherent mix of song excerpts and bits and bobs of larkery: but by the time of their final Christmas disc in 1969, everything has become so extraordinarily fragmentary that it's hard to imagine what fans made of it at the time.
So, here is that last Christmas disc, from '69. The four band-members are recorded separately (as had also been the case with the previous year's release) and it's telling that John and Yoko predominate -- George and Ringo are hardly heard. The whole thing's pretty weird, but makes for an oddly compelling listen.
Very different stuff tomorrow -- but then again, it's very different stuff today, too.
Track listing:
1 The Beatles: The Beatles' Seventh Christmas Record
Posted by Chris Goode at 7:00 AM

Dear Chris,
I came across your very interesting blog and would like to direct you to my blog (with ao posts on Laurie and Thomas A Clark): www.peterfoolen.blogspot.com.
Perhaps we could make links to each other posts?
kind regards, Peter