December 12th: With The Chipmunks 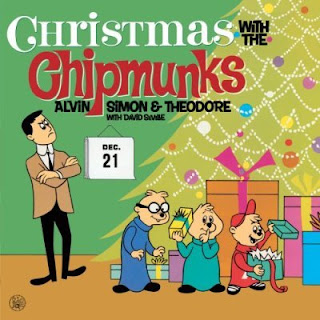 For some of us, of course, it's the altogether more Canadian pests The Raccoons who bespeak the very essence of Christmas; but for our American cousins, only The Chipmunks will do. It's a franchise that goes back to 1958, and except for a modest hiatus in the 70s, they've never really gone away. (A new feature film is due out any second now.)
For the wholly uninitiated: there are three Chipmunks: pranksome ringleader Alvin, boffinish Simon and cute but credulous Theodore; all share a surname, for reasons I think I prefer not to go into, with their human sidekick and guardian David Seville. And basically it started out as a Pinky and Perky kind of thing -- harmonising voices recorded at half speed and then played back at regular r.p.m. to sound... well, chipmunkish, innit. But now there are feature films and all sorts. (And of course, for a while, there was Hanson.)
So. Three tracks here: an earlyish and exceptionally irresistible Chipmunks Christmas hit; a little reminiscence from the marvellous Patton Oswalt, which takes a lurch towards more alarming Bill Hicks-like territory that had me weeping with laughter the first time I heard it; and finally a real oddity from 1968, with the Chipmunks tussling over studio space with the splendid then-popular blues/boogie band Canned Heat ('On the Road Again', 'Let's Work Together'). How this came about, I've no idea, but it's very odd indeed.
Still, look, if I seem like I'm not really too excited about all this, it has nothing to do with my affection for Dave and the Chipmunks, which is, as it should be, somewhere between modest and negligible. It's just, we got a comment yesterday from Tom Noddy, the Bubble Man himself. This is the single best thing that's ever happened in three and a half years of doing this blog, and, honestly, really I just want to lie on my bed and beam at the ceiling.
But, all the same, enjoy some Chipmunk fun, and I'll be back tomorrow morning with something completely different.
Track listing:
1 The Chipmunks: Here Comes Santa Claus
2 Patton Oswalt: My Christmas Memory
3 Canned Heat & the Chipmunks: The Chipmunk Song
Posted by Chris Goode at 7:00 AM