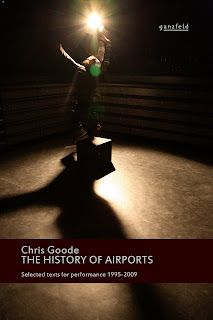 which I'm really excited about, though I'm beginning to doubt that it's ever going to actually physically emerge from the print-on-demand facility I'm using... -- so we face the somewhat jarring prospect of a book launch event (at Stoke Newington International Airport, on Bonfire Night) without books. (UPDATE: no, we don't face that jarring prospect, not any more: the launch event has been rescheduled for Wednesday 25th November, still at STK.)
Anyway, I'm not going to elaborate too much on any of this now, except to say that there is a season web site, with all the performance details & lots of further info, and via which you can buy season tickets (a v good idea -- £35 for the whole shebang), donate money (also a v good idea), and take advantage of a reduced price for pre-ordering the book (an excellent idea, if I may say so -- and comes with a binding promise that there will actually be a real, tangible book, sooner or later). Also there's a mixtape on the site where you can hear stuff by me and others.
So! This season, eh? Please come to as much as you can -- it won't be any fun without you -- and bring friends -- spread the news -- come and be a part of it all. I think I can safely, if immodestly, say this of pretty much all the work in the season: nobody else does this stuff. That's why I do it. So if you don't come and see me do it, you don't get to see it being done: and that, honestly, would never do, because it's work that likes you.
End of infomercial. Hopefully, next time we meet in these pages, we'll be talking to each other about, y'know, the rest of the world. Lots to catch up on, and none of it involves you sitting in a room staring at my stupid loudly-talking face.
All this, and love too xx
(Oh, p.s., the blog list in the sidebar has had another long-due update. Still needs weeding for the dead and the dormant, but there are some highly worthwhile new bits and pieces in there. I'm particularly excited right now about Steve Roden's blog, the new Zanzibar Beer blog, and something called Fafblog to which the heroic Malcolm Phillips alerted me only today. Enjoy!)
Posted by Chris Goode at 8:59 PM

Looking forward to O Vienna - Jonny put me on to it... interested also in the w/e workshop end of Nov. Would love to do the whole season, but some dates clash w/my own readings. Alas.

will keep my antennae tuned...