"For in his days was the earth divided..."

Every so often I'm asked by someone to trace to its origins my professional interest in theatre. My stock answer to this is that everything changed on the evening in 1992 when, as a student, I saw for the first time Complicite's Street of Crocodiles at the National; I describe how I travelled back that night from London to Cambridge, my companion and I both shocked into silence by the ineffable beauty and the deep emotional impact of what we'd just seen, and how I stayed up till dawn, scrawling frantically on big bits of paper stuck all over my walls as I tried to figure out how the company did it. (I dare say this anecdote has been inflated in the retelling over the years but I'm hoping it'll stick nonetheless, so that when the biopic of my remarkable life is finally made, there's at least one scene in which something actually happens.) This post, however, isn't about Complicite, but about an earlier theatrical experience that on reflection I suspect may have had an equally formative influence on my thinking about the medium and its context.
It was, to borrow a line, twenty years ago today that the final curtain fell on a production that I acted in at school: a play by the writer and academic Mick Mangan called The Earth Divided. The play had previously been presented at Riverside Studios, under the direction of a young whippersnapper called Stephen Daldry. A springily written piece set mostly in 1607, and full of ribald wit and anarcho-communist musings, The Earth Divided could hardly be said to have 'school play' written all over it -- I mean, I'd been in Hobson's Choice a year or two earlier -- but Mangan's college friend Roland Clare, who was already a pretty longstanding member of the English department at Bristol Grammar School (where he still teaches, these twenty years on), was entrusted with the realization of an expanded version of the work. Looking back on it, it seems a pretty  peculiar thing to have happened at all -- a very adult, deeply political, and in sensibility highly contemporary, fringe play by a Sheffield-based writer turning up on stage as 1988's Christmas show at a relatively conservative secondary school in Bristol. 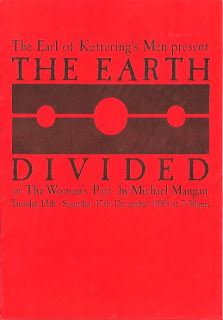 How much of that oddity I was aware of at the time, I don't know: but I was certainly keenly aware that this was something very different. Different from the usual creaky rep classics that were generally considered appropriate for schoolkids to work on (though Roland had form in this respect -- it's an abiding regret that I was too young to have seen his 1980 production of Strindberg's A Dream Play, which I'm sure was extraordinary); but different as a prospect for me too. I had some interest in theatre at this stage -- I was 15 -- but only really in terms of the license for showing-off that it conveyed; I wasn't serious about it -- though I guess I must have had some inchoate sense of wanting to take it seriously, as I remember feeling a bit indignant when I turned up one lunchtime to audition and Roland said to me, not unkindly: "You do realise this isn't a comedy?" (Likewise I fairly glowed with pleasure when after the audition he observed, with no little surprise: "Actually you're rather subtle...")
At any rate, I was cast, in the toothsome role of a fire-and-brimstone Puritan called Ebenezer Scorton (or, as one character rechristens him, "Ebenezer Scrotum" -- again, heady stuff for a school play; as Roland's then-young daughter observed: "It's very rude, isn't it, that bit about Ebenezer Testicles"). And so that Autumn term became dominated, in my heart and mind at least, by work on the play and everything that went with it. 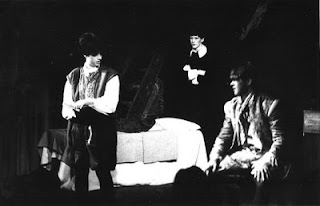 L to R: Cathie Ackroyd, CG (looking a bit like Jobriath), Daniel Pearce
In fact perhaps the most significant and lasting insight that I gained into theatre-making during those weeks was the crucial importance to the work of that nebulous-sounding "everything that [goes] with it". In other words, that there is the play -- the text, the acting, the design, (in this case) the songs, the physical production, and so on; but critically, there's also a microculture that both arises out of this work and nurtures and to some extent incubates it. Usually that cultural aura is missing in school-level drama -- and, for that matter, in plenty of professional productions: you turn up, do your work, learn your lines, a production is gradually formed: job done. It's sort of necessarily the case, I suppose, in the context of a school play, where work is crammed into lunchtimes and free periods and occasional hours after school or at weekends.
In the case of The Earth Divided, however, we all (or nearly all) shared a sense that something bigger was happening -- not bigger in scale, but bigger in aspiration and more dilated in terms of its receptivity to the richness of possibility around it. In my case I think it mattered very much that, for the first and perhaps only time in my life, I was spending a lot of time with people who were all two or three years older than me, who were either sixth-formers or staff, and who were therefore capable of creating between themselves more equal adult relationships than I'd been exposed to before. Partly this is about a kind of informality that might seem quite trivial were I to try and describe it: but even then I think I was producing out of it a bunch of observations about ensemble, about collaboration, about boundaries becoming fluid and to some extent negotiable. 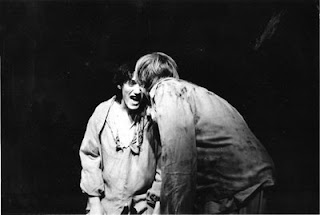 ...this earth divided we will make whole
So it will be a common treasury for all.

What I do know, and remain grateful for (and awed by), is that the experience of working as a teenager on The Earth Divided was the beginning of a long journey for me -- one that still feels barely begun -- in trying to discover what part theatre can play in securing precisely that common treasury, and the extension of social justice and civic remodelling that that aspiration bespeaks. What's more, it was certainly that experience that led me to start suspecting -- and I remain ever more convinced that this is so -- that theatre is uniquely placed to help initiate and support the great task of the imagination that that programme requires. To the casual observer we would presumably have looked just like a bunch of schoolkids sitting around talking animatedly about Aleister Crowley over pizza, or playing a ramshackle twelve bar blues together (n.b. The Earth Divided is, regrettably, still the only production I've worked on that's spawned its own band -- oh, remind me to tell you about the time we nearly played with Shirley Bassey...), or crammed into a car listening to the new album by some emerging band called R.E.M.; but in fact we were plotting a revolution -- one that seems to become both more urgent and more plausible by the day. I don't know much about what's become of most of the Earth Divided gang, and I don't imagine they all necessarily recall it in quite those overheated terms: but I don't doubt they all remember it with affection; I'm sure they know even better now what we all guessed then -- that we were doing something pretty special; and above all, I'm certain they're reassured to know that, in the twenty years since we last all saw each other, hundreds and hundreds of kids have spent significant portions of their lives sitting in a room with Roland Clare, getting themselves ready to change the world. 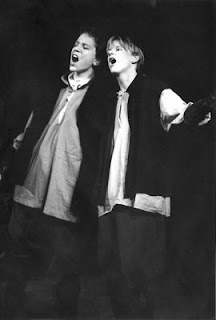 I didn't see Street of Crocodiles until 1998, but the impact it had on me was similar. I'll never forget the feeling of travelling home across London after watching it. Seeing that performance meant a change in my attitudes to theatre, and to the type of work I wanted to be part of. It was also the reason I didn't leave drama school that term, which was very definitely on the cards at the time, but instead stuck it out in the knowledge that there were people out there who had found another way in theatre.

It was good to be reminded of that...

Just a note to say that I really enjoyed this post. Hearing about how people started is one of my favourite things to hear about, for obvious reasons. Much love,
T

Hi Chris
I hope two years late is better than never leaving a comment. Thanks so much for writing this and for posting photos of a remarkable time. You are not alone in remembering the experience of being in The Earth Divided play as extraordinary. I

I had just joined the school in the Lower 6th when I rashly auditioned for the play. My hair had been in long, red curls for a long time. As I left the Friday afternoon audition Roland mentioned to me that the part I had auditioned for was for a young woman pretending to be a male travelling thespian and so I would need to have shorter hair. By the end of the weekend I had had all my hair cut off and the remainder dyed black in order to convince Roland that I could play the part (Young Alice I'm pretty sure I was called). Roland was shocked and laughed and claimed he was joking but let me play the part. He was brilliantly creative in creating the visual and linguistic themes that ran through the play, for getting us out of A level Maths and Economics lessons each week, for taking us to London to perform pieces at the partially restored Globe Theatre (I believe the Guardian wrote a review of us which I still have somewhere in the script with my poor colour snaps taken by my granny), he took us to Pudding Lane, had us work directly with the playwright and yes he really did introduce us to R.E.M. before their Green album had been released.
Interesting to read from you that he is still teaching at our old school. I stupidly didn't study English at A level and so never had the pleasure of him as a tutor but most of my gang at the time did. I feel I should write to him to thank him for choosing me to be in his brilliant play.
Cheers, Cathie