I was trying to find something among my boxes and boxes of papers this weekend, and didn't: but found a bunch of other things instead: one of which, pleasingly, since the documents in question long since vanished from my hard drive, was a cache of texts and other bits and pieces relating to my 2004 show Escapology.
For those who didn't see it -- which is, after all, on balance, probably a majority of people in the world -- Escapology trapped together, for no clear reason, in a waiting room, six more-or-less iconic figures from history: Joseph and Etienne Montgolfier (Tom Lyall and Jamie Wood), Harry Houdini (Vanessa-Faye Stanley), Abraham Lincoln (Selina Papoutseli), Marie Curie (Davina Silver) and Helen Keller (Sebastien Lawson).
A pivotal moment two thirds of the way through the piece had Lincoln (portrayed as an imperious dwarf) responding to the burgeoning scenes of civil unrest and calamity unfolding outside the room, narrated by -- who else? -- Helen Keller, peeping nervously out of the window and surveying the chaos. Speaking in Greek, with simultaneous translation by Marie Curie and, eventually, accompaniment on massed ukuleles (this was 2004, just months before the uke jumped the physical theatre shark, mmkay?), musicial saw and, discreetly offstage, yrs truly extemporising upon the System 2 Omnichord, the President had this to say...
(I don't know why the repost seems timely, but it does. I find myself recalling Theron's remark after he saw the show at CPT. "Oh boy," he said, "you've really done it now.") 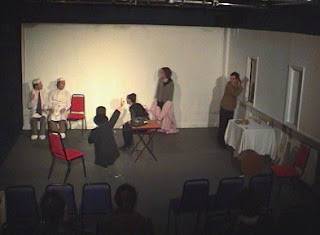 My fallow Americans:
It is surely a measure of the esteem in which I was held as your sixteenth President that during my term of office I was only shot twice.
The first time, the bullet merely penetrated my hat.
The second time, I was at Ford's theatre -- a theatre very like this one, with fine rococo features and magnificent plunging architraves -- to see a play called "Our American Cousin". In truth it wasn't a very good play and I had spent much of the first act contemplating the number of Maltesers I could insert beneath my foreskin. When my interest in these speculations passed, it occurred to me that I would find the evening tremendously enlightened if a gunman were to burst in to the State Box.
In actual fact I could not have been more wrong. For when, rather ironically, a gunman did burst in to the State Box and twat me in the back of the noggin, I found the experience left me not so much enlivened as dead.
As is the case with Presidential assassinations, the Vice President was installed in my stead, and indeed he did tolerably well in the post until he too was assassinated while on a lamping trip with friends who mistook him for a moose. In a top hat.
His successor, the erstwhile Speaker of the House, also acquitted himself decently for slightly less than a week before being shot during a hysterical fracas at a national spelling bee. He was replaced by the President pro tempore of the Senate, who lasted just thirty-six hours before ending his own life in what appeared to be an autoerotic assassination error.
The Secretary of State was installed and assassinated.
The Secretary of the Treasury was installed and assassinated.
The Secretary of Defense was installed and assassinated.
The Attorney General was installed and assassinated by six separate assassins, who, to their great credit, had formed an orderly queue.
The Secretary of the Interior was shot up the anus by a dinner lady.
The Secretary of Agriculture was pitchforked to death, and then his dead body was assassinated.
The Secretary of Commerce had his throat slit and gold-tipped bullets inserted into the wound.
The Secretary of Labor was assassinated before his installation as President was complete. The Secretary of Health and Human Services was assassinated as he stepped out of his limousine on the way to his own inauguration. The Secretary of Housing and Urban Development was assassinated while he read the telegram which confirmed his appointment.
The Secretaries of Transportation, Energy and Education were all assinated while they argued heatedly about the line of presidential succession. The corpse of the Secretary of Education was then used to beat to death the Secretary of Veterans' Affairs.
The Secretary of Homeland Security arrived for his Presidential inauguration to resounding cries of "Dead man walking." However, against all odds, he survived in the post for the remainder of that term, and for a full second term, and became one of the most popular and revered political figures of his generation. ...I'm kidding, of course. They took that sucker out like the trash.
At this point, the line of succession having been exhausted, a variety of Presidents were tried out, from senior White House staff including the Chief of Staff and the Director of Communications, through to an array of PA's, pen-pushers, perverts and sub-postmasters. All were summarily assassinated. 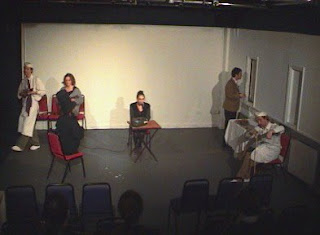 By this point, with the average term of a newly installed President down to just 19.8 seconds, it was becoming harder to find volunteers to do their patriotic duty. A special act of Congress was therefore passed to allow for Presidents to be drafted. It was at about this time that America had her first black President. And her second. And hundreds more. Proud times indeed for the Civil Rights movement.
The accelerating incidence of Presidential assassination seemed to be unstoppable: until an amendment to the Constitution made it possible for the first time for all age restrictions on the office of the Presidency to be lifted. Then, following a televised pageant watched by millions, little Janet Ben Romsey was elected as America's first schoolgirl President. In her fuchsia-coloured taffeta party dress, Janet captured the nation's hearts during her inauguration as she sang the immortal words of Whitney Houston: "I believe the children are our future. Teach them well and let them lead the way. Show them all the beauty they possess inside." Finally, it seemed, the country had a President everyone could love. Unfortunately, Janet's disquisition on 'the greatest love of all' came to an abrupt end when she was assassinated simultaneously by over eight hundred masked gunmen, and all the beauty she had previously possessed inside was suddenly visible across a wide area of the back wall.
And so it continued until 2001, in which year nearly four thousand people, many of them children as young as apples, were assassinated for no better reason than they were the President of the United States of America. Something had to be done -- and it was done. A further amendment to the Constitution made provision for other species to assume the mantle of Commander-in-Chief.
Since then, it is estimated that anything up to 35 million chickens have served as President of the United States, at an average rate of one every 2.7 seconds. Almost without exception they have been assassinated. A lucky few have died of natural causes while in office, or fallen downstairs. One was liberated by animal rights activists, and went back to its job as a filing clerk at the U.S. Patent Office. One became a carny. One had a hit single on the urban charts. One was briefly married to Liza Minnelli, but relented, and returned to the White House, where it was fucking assassinated.
In November 2004 the rate of chicken Presidents of the United States is steadily increasing by approximately 1.1 chicken Presidents per second per second. By extrapolation it is likely that in 2005 the rate of chicken President acceleration will itself increase by anything up to 1.85 chicken Presidents per second per second per second.
In 2005 America will have enough chicken Presidents to fill Ford's Theatre two thousand five hundred times.
Two thousand five hundred and fifty, if you rip the beaks off.
Posted by Chris Goode at 11:13 PM

Yayyy.
Man, that show was fun. I always meant to take you up on why you said it was like a musical about cancer put on by cancer patients. And somewhere around here I have a drawing I did when I was four of Melvyn Hayes in Babes in the Wood.
kthnx