While I was passing a few days at the family seat in Portisheadshire last week I took the opportunity to look back over some of my very earliest blogging activity. Of course in those days they weren't called blogs and they weren't online; no, the entries were instead posted to a yellow A5 exercise book with 'News' written on the cover. But there's no mistaking the bloggish tone of the writing.

I don't know if anyone will find any amusement in the reposts below, but given the relatively enthusiastic response to my last sharing of pre-juvenilia on these pages, I thought it was worth a shot. What follows is slightly later in my career than The Books of the Pigs in thes Sieris -- I was born in May '73 so as you'll see from the dates I am five or six years old here, and already putting behind me the hotheaded radicalism that had informed Pigs. Indeed a couple of times here, very much under the influence of my teachers at the time I must confess, I seem almost to be dallying with a prototype of the New Puritanism that one might now associate with, say, Matt Thorne, the excellent novelist: though something of Barthelme and perhaps Brautigan continues to haunt the narratives. You can also see at the end here, as the notion of Thompson's Bank starts to crystallize in my imagination, a couple of examples of my early theatre criticism: not highly nuanced, admittedly, but certainly nothing that wouldn't slot right in at Rogues & Vagabonds.

I have retained my idiosyncratic spelling (lamentably derivative of Pound I'm afraid) as per the manuscript, except for a smattering of silent corrections where sense would otherwise be obscured.

I like wathing television.
The programmes i like best are cartoons.
I often Play shop.
I Read about one and a half books. a week. The magic wishing chair.
Richard Smale is my best freind.
In the woods at ashton court. is where i lik to explore
Haunted things are things. I like best.
Qwaint Old shells are what i like to collect.
My teddy bear is calld andrew.
I like billding a garage wich i can run my cars down. I like it beecase I can billd with my bricks.
We went to Burning-ham two weeks ago.

We have lovely dinners.
We change into our T-shirts shorts and daps evry Tuesday and put our daps on evry day in the week.
Our school is nice.
I like the children in our class and one in the bigger class. Our playgrou-
nd is made of stone and gravel. I often play hopsc-
otch (wich is a funny game for a boy.) We use our playground after prers before diner after diner and at 3'o clock.
Since hopscotch is the only game I play I am going to write about it. I sh-
all tell you why I like it.
Well. Ah. Ummmmmmmm-
mmmmmm. Well. maybe.
Ummmmmmmmmmmm.
It's rearly becos I like hoping.

Once upon a time there was a fly. It's favorete place was a lampshade. It was because the adults couldn't reach him. One day a lady stood on a stool to try and get 'im with a thing she called NEW HAIR-RAISEING BATFLY KILLER. But she failed. She fell on her head. BUMP, CRASH, Boom-titty-Boom-Boom. She was in her 80's so it did hert her. 5 stiches, A broken leg, Tonsilites. Well she died. But of corse the fly remained. (On the lampshade)

The Turkey went grubby grubby. The cockerel went a-squawking out the new morning. The sheep got very shaggy througho-
ut the year.
The Goose waddled down the road. The Pig grunted his snout off. The cow Plodded accidentally in her muck.
They are very woolly. Yes.
Grass, thats what they eat.
In a fold or a field. kindly.
Their wool is made into quilts or Jumpers. Their meat is eaten.
I am a sheepdog. I have got nine sheep to guide. Baahboo, Grasey, Pinky, Dooddley, Inman, Puddley, Whitey, Blacky and Plopp.
One day Somthing nasty happend. I am a black dog you see, one d-
ay I was rounding up the sheep when Plopp did a plopp on my fur.
I had to have a bath. I apb-

As I was saying last tearm, I apbso-
lutely hate baths! ow! ow! Well -
there I was - (hatingmybath)! It was
a terrible afternoon! come by Liz! 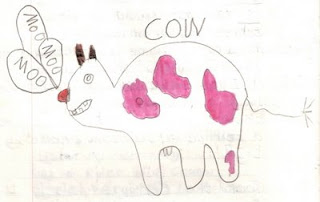 The Frog Band And The Mystery OF LION CASTLE

In which the frog band go to Lion Castle and have an unexpected visitor.

The frog band had gone to lion castle, to meet Prefector de Lyon. When they first saw him he invited them into labortary and Godfrey was interested with some conection-wires.... when suddenly......

PLOPP! BANG! Uuuuuu...
Prefector, Godfrey and Shortie went out side only to find...
2 miles of bright matirieal, 7 strings and a shopping-basket. There, in the middle was a glum, old frog. It was Alphnose le Flic.

IN WHICH SHORTIE FINDS A FISHEY LEAVER 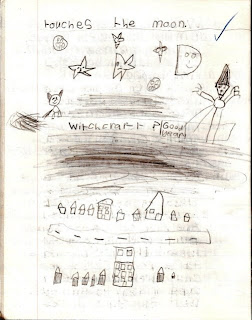 On New years day, I went to a pantomime. (It was Babes in the Wood.)
It starred Jim Davidson, Melvyn Hayes, Ben Warriss, The krankies and Tammy Jones. The first half was two hours long, but the second half was only an hour long. Before that I went to a restraunt. In the first half there was some "Dancing Waterfalls," that were very pretty. My Mum couldn't look when they put a car speeded up, and some people were pretending to drive their cardboard car! I didn't go to bed untill 11.00pm that night!

I thought that the whole preformance would be a bit more "acrobatical", and the clothes were more modern than I thought they would be. I thought that most of the act would be "silent", but instead it was quite noisy. I liked all the magic words Zippo and Tommy used like "Chicken Horrors!" Altogether I thought the preformance was well worth going to. I had seen the trick when Tommy got into the sack and was locked up in a case before in record time of ½ second . I thought the fire eating was also very good.

if did fig jam lit game fit lamp the gag dad fat
Posted by Chris Goode at 2:04 AM

Thanks Chris, I enjoyed those glimpses. I like hoping too.

It does make me think of my own early struggles with the English language and the world, which of course I will now share with you. I did discover an old diary last week, dating from when I was 10. Not quite so interesting as yours, alas; I meticulously and doggedly kept a series of staggeringly mundane entries for about a month, when all I did was feed pigs, have tea and "potter about". The only revelation was that I have in fact ridden a bike, because it was there in capital letters with three exclamation marks.

But I was obsessed with making books. I cut out pages and stapled them together, early chapbooks perhaps, and I still possess quite a pile of them. Perhaps the best is the unfinished masterpiece, "Gerald The Fox". The entire text runs: "Gerald was a fox, and a very foxy fox at that." Gertrude eat your heart out.