#26 The Streets, The Hardest Way To Make An Easy Living 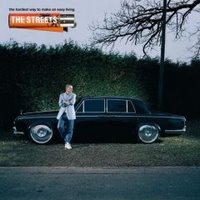 The Streets are by any reckoning one of the best things to happen to British music this decade, and it's some measure of Mike Skinner's extraordinary achievement in developing and defining (and cheerfully defiling) his sound across his first two albums that this third was greeted with a certain amount of yawning and shuffling. Quite unmerited, I think. The sound is spikier and the organisation of the album as a whole is less cohesive -- and it could be argued that there are fewer gilt-edged songs here than he turned in on A Grand Don't Come For Free -- but you don't have to read deep between the lines to apprehend the real beef that critics and punters alike have had with The Hardest Way...: there is clearly some resistance to the shift in balance of the topical content of the songs. Suddenly, instead of being about uphill working-class life on Bigtown estates, they're about how Skinner's life has changed, and how he's had to contend with an altogether different set of challenges as a celebrity. Certainly, this change tears a hole in the Streets brand; but Skinner isn't that brand, & he's just doing what he's always done, writing vividly and articulately about what he sees and experiences and how he feels about it. The grand narrative may not come for free any longer, but to react to an album of such vital force and sustained integrity with such protestations of ennui is infantile and, itself, pretty boring. Skinner's got the skills and the talent -- and, by the look of it, the guts -- to sustain a long and fascinating career, and has already crammed into the first few years of it a level of restless and uncontainable inventiveness that makes it impossible to even consider writing him off.

#27 Adem, Love and Other Planets 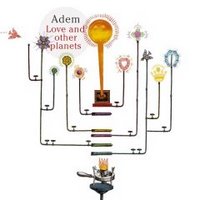 So I just had a little peek at Wikipedia to see if there was any info on whether Adem might want to come to the pictures with me, and it doesn't say, the sods, but it does quote him as saying, earlier this year (it's on his web site, actually): "I love libraries. The existence of public libraries is one of my favourite achievements of human kind." Which makes me think that maybe we should skip the flicks and go straight for the civil partnership. I appreciate that this will perhaps read as a mildly sinister sentiment to be expressing, even amid the fairground whirl of unrequited devotions that everyone secretly knows Thompson's to be. But in my defence, he started it. Have a listen to Love and Other Planets, preferably outside and on headphones and with no particular place to go, and tell me this man doesn't love you to bits. There is no other explanation, rational or otherwise, for this album: for the driving visionary paranoiac lyricism of "These Lights Are Meaningful"; for the bareback tenderness and irrepressible la la chorus of "Something's Going To Come"; for the rough magic of "You and Moon" ("Searching / I wore out my telescope / and I nearly gave up hope", it begins, like the best Russian novel never written)... On and on it goes, in the best possible way all things to all people, a testament, a witness statement, a beautiful gift completely wrapped up in itself. God bless Adem and make him good.
#28 Paul Simon, Surprise 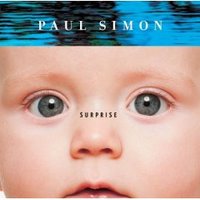 Exactly le titre juste, it seems to me. Paul Simon -- confusingly, for one of the half-dozen truly great American songwriters of the last fifty years -- hasn't really turned in a strong collection of songs (notwithstanding the biannual repackaging of his greatest hits) in the twenty years since Graceland -- which was anyway something of an outlier -- and, before that, Hearts and Bones: an album about which I alone among all living creatures feel enthusiastic and affectionate. There was something interesting about the moment of reading that Simon was in the studio with Brian Eno; after all, Eno's collaborative promiscuity means that for most artists of stature it's probably a matter of when rather than if: no biggie, surely. But the feeling that this was a curious mismatch prompted a deductive reflection: Simon must, after all, have a stronger and more distinctive identity as a songwriter and singer than has come to seem the case in all the generic eddying and buffeting that has characterised his solo career. Needless to say, Eno's influence is palpable -- his own Another Day on Earth, from last year, and his work with Daniel Lanois, are the reference points, I guess -- and the album gets off to what can seem a slow and stodgy start, with Eno-drenched treatments making Simon sound almost perception-alteringly lugubrious, particularly now that his voice is just beginning to coarsen a little. But it picks up, opens out, becomes fleet and light and a bit giddy even, and repeated listening reveals strong and supple and occasionally ardent songs, with more anger but less sourness than the classic Simon of 25 or 30 years ago. It doesn't quite all fall into place until the last track, "Father and Daughter", which is as simple and good-hearted as anything he's ever recorded, with or without his Fraggle-shaped ex-compadre, and reveals the singer, rather than the producer, holding steady at the still centre of the operation: and suddenly you want to throw streamers. Surprise is the moving sound of someone remebering a longstanding appointment, keeping a promise. 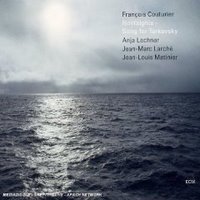 O bother. Is this the first sign of impending middle-age, choosing two ECM records for your top 50 of the year? Actually, in my case, no, it's about the eighth or ninth sign, and presumably in this case, as in all the others, resistance is futile. I don't know much about Francois Couturier beyond another ECM disc, about ten years back, with the violinist Dominique Pifarely, a pretty severe record called Poros for which I've yet to develop much of a fondness. But I do like that Couturier -- like Georg Graewe, who he reminds me of in some ways -- is prepared to be quite ugly, to make interventions into a generally spacious sound field that are dense and bunched-up and intractable. Two things in particular really work in Couturier's favour here: the instrumentation (cello, soprano sax and beautifully played accordion, alongside his piano), which gives him reach and an undertow of emotional warmth that particularly his occasional more sentimental 'classical' gestures ironically lack; and the overarching dedication to Tarkovsky. Often these conceptual orientations either fail to communicate or they signify haphazardly: but here, Tarkovsky's films function as objects which anchor and in some ways come to anticipate the music, which is not, then, pictorial, but simply fixed in an exterior relation to listener and performers alike. I don't know, sometimes I listen to this album and there's nothing there for me, and at other times it's compelling and deeply rewarding. Certainly it is a strange recording, and one which repeated exposure is not making any more familiar: and there's something exceptionally decent about such unassimilable work, and about the imaginary space it occupies. [p.s. I've just remembered: there's yet another ECM record still to come, quite high in the list. Fetch me my zimmer, somebody.]

#30 Arctic Monkeys, Whatever People Say I Am That's What I'm Not 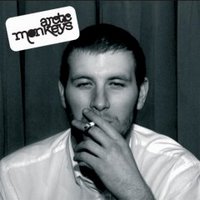 Suddenly it seems like a very long year: to think that this album was released in January, when it feels as though it came out at about the same time as The Lamb Lies Down on Broadway or Sibelius's Fifth Symphony. This is partly I suppose because the buzz was building all through the second half of 2005 -- oddly enough I first heard of them through a discussion on the always marvellously entertaining bulletin board at the web site of Jonathan King. (What on earth can he possibly have seen in them? ...Oh.) What needs to be said? This is a cracking album. I sort of hope they never make another. They'll never have this much energy again. Actually I also think it's reasonable to say that this makes the list partly as a representative of the several very useful records that were able to come through in its slipstream: there would have been an argument for finding a slot in the Furtive Fifty for Milburn's spanking Well Well Well and the triffic recent lick-and-a-promise debut from Bromheads Jacket. On weighing it all up I simply thought the Monkeys had arrived more fully formed than the others, and made what will probably be a more enduring album. Good on them. But seriously. Retire! RETIRE!!