In which the very hairs of my head are all numbered

My friend, the lovely and talented David Chapman (maybe you saw him in Edinburgh a few years ago, or subsequently at CPT, where - in both cases - he was performing his terrific piece The Bisexual Alphabet), writes from Ho Chi Minh City, where he's spending a year on a teaching placement. His email characteristically veers between topics and tones with the high-velocity daring and rantipole cheerfulness of a Vietnamese mototaxi driver, and as ever he's full of questions, most of which would be the height of impertinence coming from anyone else... (He casually drops the word 'interrobang' into his message -- which is a new one on me, though I see it goes back to the early '60s -- and it strikes me that, if it weren't already taken, this would be an awfully good, practically onomatopoeic, description of the sensation of being on the receiving end of a conversation with David.)

I'm only relating all this because among the questions in this most recent email, he says: "I need a brief history of your hairstyles." To which my inner King Lear kind of says, "O reason not the need... but in your case I'll make an exception." Nonetheless, it seems that this might be a request that, peculiar though it is, might be entertainingly dealt with here at the customer service counter of Thompson's. It still won't quite make me the Dennis Cooper of Stoke Newington, but these things don't happen overnight...

I had a history teacher, once, in sixth form, who would sing to me, after the fashion of Betty Boo, thus: "Chrissy Goo, Chrissy Goo just doin' the doo". (...It's honestly only just struck me how extremely curious that is.) Anyway, here, for your delectation, David, and to tickle your xiphoid process while you chow down on tonight's pork variant, is a brief survey of some of the do's that I have, in my time, done. Those of a sensitive disposition should look away now, the following contains scenes of mild peril. 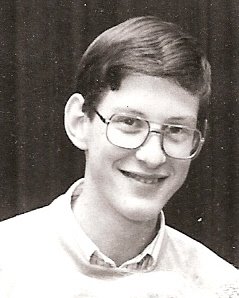 Our story starts in (I think) 1989. So I'm just, or just about to be, sixteen. Already beavering away at the bleeding edge of any number of creative vanguards, you will note that I have here invented proto-retro geek chic. At this time, the persons responsible for my hair were Anthony and Anne-Marie, who had (and possibly still have) a nominally unisex salon in Clifton. I never worked out whether they were brother and sister or husband and wife. I would be prepared to believe either, and, indeed, both. I say 'nominally' unisex because I'm certain I was the only male customer they ever had. Every so often a chill goes through me even now when I find myself wondering whether I've completely misunderstood the word 'unisex' all along. (Like the story I adore, supposedly true but perhaps a suburban myth, about a very elderly man who commits suicide after someone finally plucks up the courage to tell him that 'hirsute' is not, in fact, a synonym for 'nevertheless'.)

It took me ages to figure out who I remind myself of in that photo, and I'm not quite sure I'm right even now, but look at those glasses, the slightly lopsided smile... Do I not, perhaps, put one a little in mind of the young Stephen Hawking? 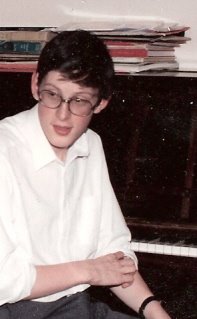 Here I am again, the following year, on the cusp of turning 17. This is at band rehearsal. By the looks of it, we have just finished demolishing the Gerry Mulligan chestnut 'Festive Minor' and are probably about to give the Chet Baker tune 'Jumpin' off a Cliff' a pretty thorough kneecapping. ...Actually, if I'm not mistaken, we weren't too shabby; our cover of the Pointer Sisters' 'Pinball Number Count' from Sesame Street was particularly fly.

Damn, I had real piano chops in those days. I can still find my way around, but technically I'm nowhere near match fit -- which is a horrible loop to get into, of course: my fingers can't keep up with my head, or with themselves even, and this is immensely frustrating and upsetting, and the discipline to put the requisite work in therefore becomes harder and harder to marshal.

Nonetheless, while my chord voicings may have been saying McCoy Tyner, from the scalp up I am clearly saying David Mellor, and this is therefore officially not "close enough for jazz".

Incidentally, it would have been at around this time that I strayed from Anthony and Anne-Marie, presenting myself at a trendier salon on Queens Road. Lord, it was terrifying. They wanted to know if I'd "like gel" -- which, at the time, was patently a bit like asking a terminally ill man if he'd like to buy a raffle ticket. 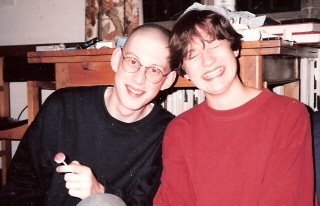 Ah, the break-through! This takes us forward three years to 1993. This is my twentieth birthday party -- or, more accurately, the party to celebrate my twentieth birthday; probably, if you do the maths, it's only my sixth or seventh birthday party. (I'm not so much the party animal, I'm afraid. Something of a party vegetable, in fact, or -- pace Gerry Mulligan -- festive mineral.) That's my friend Morwenna on the right there. It's her birthday party too. I think her facial hardware is overloading with happiness, despite the fact that I'm the one with custody of the two-colour lollipop.

More significantly, though: look, mom! No hair! It's the end of my first year at university and I've just finished performing as the eponymous not-quite-hero in my own adaptation of Gogol's Diary of a Madman: the first devised piece I ever directed, and probably in some ways still one of the best. The character is admitted to an asylum towards the end of the story and his head is shaved. First attempts at creating this effect using a novelty bald wig were, unsurprisingly, deemed unlikely to convince, and so I decided I would shave my head instead and wear a wig throughout the first hour of the show, which was then plucked off at the vital moment using a litter-picker's grabbystick. (Your jargon may vary.)

I well remember the occasion of having my head shaved. Rather than buying the appropriate clippers, we borrowed a regular electric shaver from -- if I remember correctly -- someone called Nick. And we killed it. (Sorry, Nick.) Touching my nude head for the first time was like caressing a Roswell alien. It was noisy in the shower, too. (I bought a range of hats for daywear, including a monstrously inappropriate woolly number from Oxfam, the significance of whose green, gold and red colour scheme was utterly lost on me.) It was, nonetheless, a momentous thing to do: partly because I've never been to a barber or hairdresser since, and thereby eliminated from my life one of the most penetrating sources of anxiety I've ever known; and partly because the control I thus took over my hair gave rise to what was pretty much the only outward indication there would ever be of the (entirely amicable) discontinuity between my upbringing and my adult life.

That was a good show, that one. The female lead was a radiantly lovely girl called Alice Dewey, who, last I heard, is now a senior curator at the Scottish National Gallery of Modern Art; there were wonderful voice-overs by J.H. Prynne and Terry Waite (the Mark B and Blade of Cambridge letters), and video stuff shot by Tom Guard; and, best of all, I got my face licked every night by the eerily beautiful Dorian Lynskey, who has gone on to become one of the two or three best music writers in the country, but for some reason doesn't seem to lick my face any more. 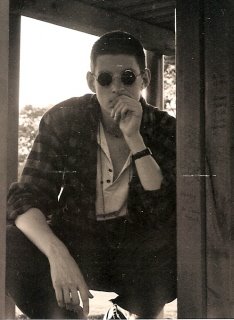 So, short, self-clipped hair became the standard for the next year or so; here I am, almost exactly twelve months later, in a promotional shot taken in a children's playground for my May Week show that year, a preposterous farrago called How To Cut Your Family's Hair -- the title taken, aptly enough, from the video that came with the Remington clippers I bought. There was going to be a sequence in the show built around sound samples from the video, but the sequence I had in mind was, in the end, too complex and never got made. So there we were with a show whose title had absolutely no connection with its content. Nobody seemed to mind. Anyway. What a poseur. Jeez.

The superfluous word in the above paragraph is, of course, "children's". 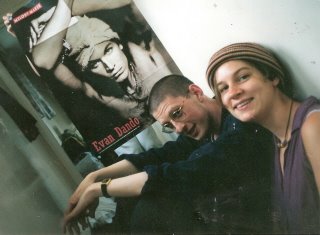 And here I am a few weeks later, with Morwenna again. As you can see, Evan Dando has dropped round for tea, and is so impressed by my smalltalk and insouciance (and the number of people who keep coming up to me and rubbing the back of my head) that in my honour he records a cover of the Big Star song 'The Ballad of El Goodo', which later winds up on the soundtrack of probably the greatest movie ever.

I was 21 and in love. Every day I thought my heart would burst. 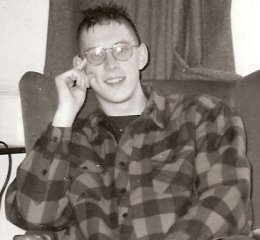 Quite a lot of alt-minded persons at around that time seemed to want to look a bit like Tintin. Actually my role model here was (the post-makeover) Ely from Go Fish. (V.S. Brodie where are you now? You rocked my world!) I couldn't quite get it together, but this is not a bad attempt, with the check overshirt and all -- I think I could pass for a generic lesbian c.1994. Which is, after all, the year it was.

I can't begin to tell you how much I was listening to Pearl Jam's Vitalogy at this time.

The apotheosis, innit. The following summer.

Note also the first appearance of lobe decor. In fact I didn't get my ear pierced till the following year, and anyway, it wasn't that ear that got done. What I'm wearing in this picture, and had been sporting from time to time over the past few months, was a little stick-on plastic jewel thing. You could buy them in packs in Tammy Girl. (Perhaps you still can. Though I suppose most kids nowadays are comprehensively pierced by 36 months and the need for self-adhesive ear-studs is completely exhausted.)

I cropped and cropped this picture to try and rid it of its odd Readers' Wives redolence, but to no avail; I think actually it probably resides in the curtains behind me.
Posted by Chris Goode at 12:32 AM

This whole post is wonderful. I read it whilst in a smelly, noisy room in Cardiff's quality Travel Lodge last night. It takes a lot to restore one's faith in humaity when sitting in yet another anonymous hotel room. But this did. I think this post contains a lot of the things that are important in life. Like playing the piano. And falling in love. And lollipops. And Pearl Jam. And stuff, y'know.

I more than agree.

The history of hair is a voyage of undoubted self-discovery.

I remember for a while sporting the all-the-rage post grunge undercut. The things one will do to make oneself look less like an angst-riddled sixteen year old trapped in the body of an angelic twelve year old. I was (alas) a late bloomer. Tough times.

Early-twenties and my father keeps threatening me with his baldness, as if some mysterious sort is going to sneak round in the night and spirit away my lustrous blonde curls to use as thatch for the homeless.