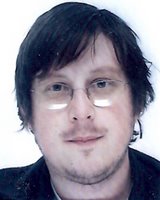 ...what I'd like to say was (deeply ironic) retro-proto-retro geek chic but is actually just me in a Photo-Me booth on Waterloo station in December 2005 trying to remember what the point was in the first place.

In my own defence, those aren't great big clumps of dandruff you can see there, that's lint on my scanner. (Also that's light bouncing off the lenses of my spectacles, and not, as it might appear, a pool of tears collecting at the base of each goggle.) Nonetheless... Can't you just see this face staring out at you from page 5 of a red-top tabloid with the word VILE somewhere near it?

I knew this whole thing was a bad idea.

Whatever. I still have clippers and no coherent sense of self-actualization so if you have any requests regarding the future life of my hair, do please let me know. But, lest we forget:

"That'll fix it," thought Ron — but he was wrong. The following Wednesday his neighbour had his bushy waist-length hair cut and permed into a model of the Queen Elizabeth and went sailing. Everywhere he went, people said "Hooray!" Sometimes you just can't win.