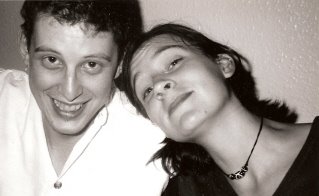 Another year on, with Morwenna again, and a rather fuller head of hair. I'm not so much an out-and-proud lesbian by this stage as a somewhat ambivalent female tennis coach.

Contrary to appearances, my facial features in this photograph have not been composed using leftovers from a jumble-sale Mr Potato Head kit. If I remember correctly. 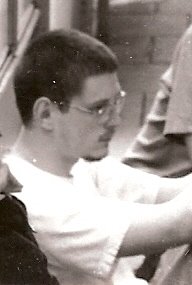 Shorn again, in a promo photo for Limb Theatre's appearances at the 1997 Edinburgh Fringe. This makes the album for one reason only. Those with forensic detection skills may just be able to make out traces of a stupendously ill-advised moustache and beard combo, somewhere in the general region of my face. This was begun, I think, towards the end of 1996, and survived until the early summer of '97, when Morwenna's then-boyfriend told me my beard looked like a little frightened rodent clinging to my throat. 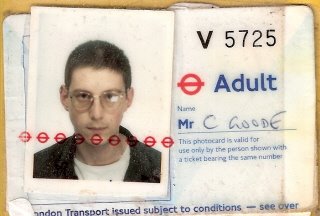 And here's my first post-beard pic of '97. This is the first travelcard I had when I moved to London that year, and the same photo graces my passport even now, where it stretches someone's credulity every so often. You can't quite tell, but I'm wearing one of those stud/cuff/chain combis on my right ear -- I'd bought it about a year before (not, in fact, from Tammy Girl), when I was getting my look together for a tv documentary about River Phoenix that I took part in. But that's another story, and indeed -- as Pinter says so beautifully of Hutton (Len, not Lord): "Another time, another time." 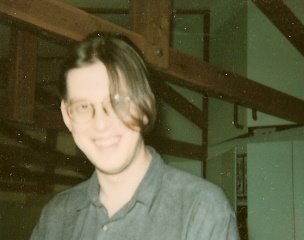 Right, so this is where we go from one extreme to the other. I can't remember now why it was that I thought I would grow my hair longer, though I'm sure it was an aesthetic decision (rather than, say, laziness, or having broken my clippers). I think I wanted to have something to flick and/or hide behind: so it was either this, or get a big panda.

I'm not absolutely sure, but this looks like spring '99. There's a relatively cute photo from autumn '98 where I'm halfway through the transition, but I can't find that right now. 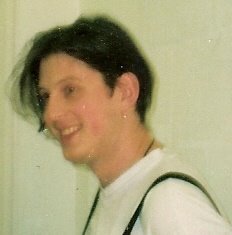 Still with the big hair, back stage at The Consolations at The Place in October 1999.

It was seeing the video of that production that made me think proper floppy long hair wasn't going to work out for me. As somebody wise once said, you can't be everything you admire. Also, Sarah Records had been defunct for about three years, and my favourite cardigan was falling apart; in other words, it wasn't the 90s any more, not really, and with every week that went by, it became less likely that I was ever going to be 21 again.

So, whatever the difference is between the sadness of being 21 and thinking your heart will burst and the sadness of not being 21 any more and worrying that your cholesterol levels are too high, this is a picture of me just beginning to feel it. As was that whole show, I suppose. 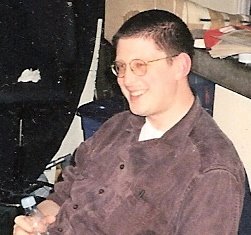 Back to basics, rehearsing Napoleon in Exile in the basement of Camden People's Theatre in the early spring of 2002. And this now is not liberated short hair, this is the short hair of not wanting to spend any time thinking about hair.

Which is the slippery slope that leads to...
Posted by Chris Goode at 12:31 AM